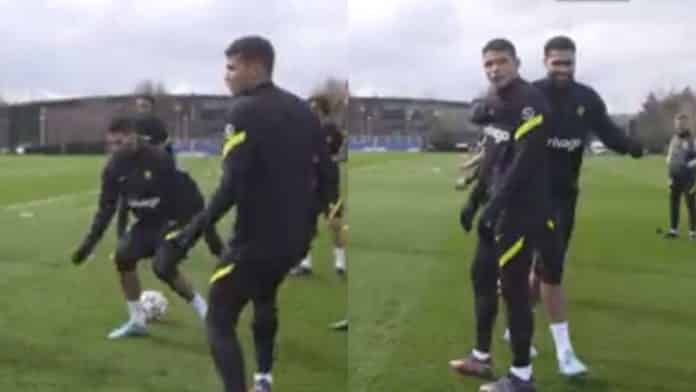 Thiago Silva, a centre-back for Chelsea, has been one of the top defenders in recent seasons.

Chelsea’s extraordinary success over the previous year and a half has been largely due to his composure and precision in defence, both on and off the ball, as well as his experience.

Thiago Silva is Brazilian, like Neymar and Vinicius Jr, but unlike his more forward-thinking teammates, he doesn’t get to show off his seemingly natural Samba skills.

Thiago was able to show off that part of his game a little bit in training with the Blues, with Ruben Loftus-Cheek as his unfortunate victim.

Loftus-Cheek was one of the midfielders trying to intercept passes during a keep-ball drill.

When he attempted to close off Silva’s passing channels, the Brazilian calmly placed the ball between his legs without batting an eye.

Thiago made an icy motion, staring the camera down before melting into a smile when the midfielder embraced him.