We’re sex-starved; we don’t have places to have sex – Apiatse explosion victims cry out 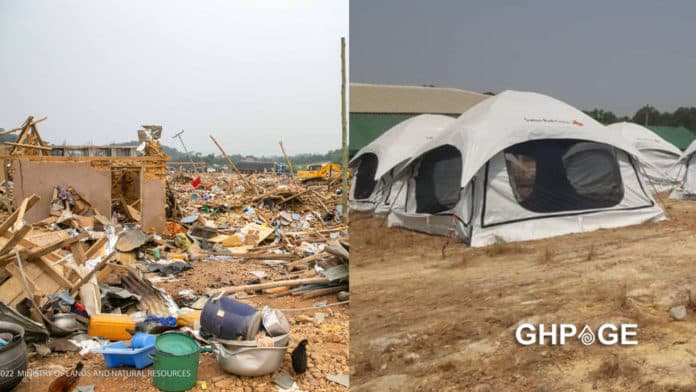 Some women at Appiatse, a town in Bogoso where a massive explosion displaced hundreds of residents, have lamented the lack of shelter kits to enable couples to get intimate.

The displaced victims told the Ghana News Agency that they have been compelled to live far away from their spouses and the lack of intimacy is affecting them psychologically.

One Florence Fosuah, a 40-year-old trader and a mother of four reportedly complained of not having sex since her arrival at the Camp.

“Sex is part of marriage so we cannot deny our partners and they cannot deny us either. We plead with the authorities to make available reserve tents to allow couples to have intimacy when the need be.

“We know some people are reported to be doing it in the bushes, particularly at night, but our customs and traditions frown on such social misdeeds with dire consequences,” she told the news agency.

Another resident, Mable Agily, a 24-year-old mother of two from Zebilla in the Bawku West District of the Upper East Region shared similar sentiments.

“My husband sleeps metres away from me, preventing me from visiting him in his all-male room in the night as he cannot visit me either.

“That leaves me with my eight-month baby to keep me company as he coughs profusely from the effects of the explosion, particularly at night,” Mable Agily lamented as quoted by the GNA.

Aside from the lack of intimacy, there are also issues of theft in the camp, difficulty in observing personal hygiene and overcrowding in the rooms.

According to one Grace Quansah, a mother of two, a room that should take six people on average is occupied by more than 20.