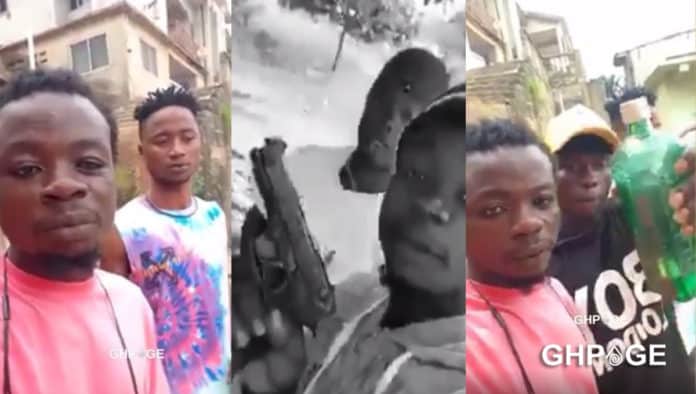 A group of young men who flaunted side arms and a pump-action gun in a video that has gone viral on social media have broken their silence.

According to reports, the men mistakenly sent the video into a WhatsApp group but before they could delete it some people had already downloaded it.

Some persons have also alleged that they are the actual robbers who attacked the bullion van and killed the police officer before bolting with an unspecified amount of money.

Well, the men, whom one of them has been identified as Obour Belling, have spoken for the first time and they claim they are not armed robbers as purported.

According to them, they are into illegal mining (Galamsey), and the guns they brandished are weapons they use to protect themselves at the mining site.

They also claim that photos of them with bundles of different currencies that are in circulation are old photos.

The young men invoke curses on bloggers and persons who shared their videos on social media and tagged them as armed robbers.

The video of the men wielding guns comes on the heels of a robbery attack on a bullion van at Adedenkpo, a community in Jamestown, that led to the murder of a policeman on escort duties and a trader.

The footage sees four men holding guns and warning Ghanaians to run when they see them on the streets.

They are heard in the video saying “No good advice” as they flaunt their guns including an Ak 47.