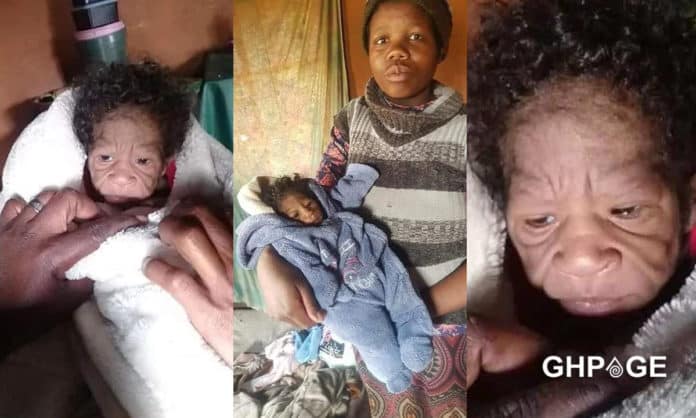 The 20-year-old South African woman who went viral recently after giving birth to a baby with a rare ageing disorder has finally reacted to the look of her child.

Ongeziwe Mtshobi, the mentally challenged mother, gave birth at home on 26 June in a village outside Libode, Eastern Cape, to a baby with an extremely rare medical condition called Progeria that causes children to age rapidly.

Progeria, also known as Hutchinson-Gilford progeria syndrome (HGPS) is caused by a mutation (change) in the lamin (LMNA) gene.

Speaking in a recent interview, the young woman lamented that she and her family have become a laughing stock in her community.

“This is my first child, I expected a baby that will make me happy, I don’t know how I will live a life with a child that is already looking this old at two months.”

Ongeziwe says she needs mental counselling and psychological help to be able to deal with this. She also called on the government to come and take the child away.

Her two-month-old baby, Onesipho, which means “the gifted one”, is already an outcast in the community, compared to something that is not human, yet her name carries so much weight and volume.

The grandmother Ntombizakhe Mtshobi, who is 55 years old, says that this is so hard to accept. It’s never been seen before that a two-month-old baby looks this old.

“We have become a laughing stock in the community, I have so many kids and I am not employed and now this happens.”

She says that the only question she has is how will the child grow up to be?

“When I hold her, I burst into tears,” in the words of the devastated grandmother.”