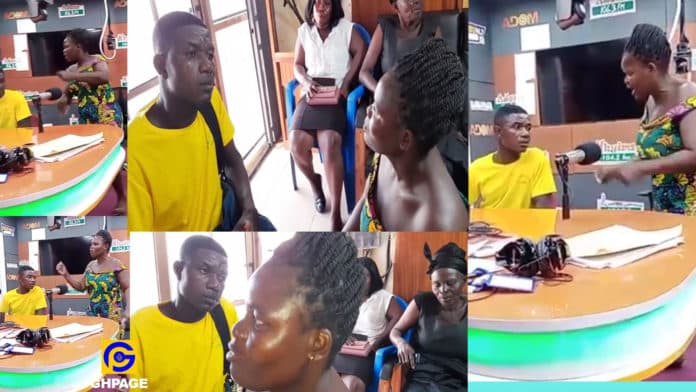 A Kumasi-based woman who physically assaulted her husband during a live radio interview has rendered an unqualified apology to the man.

Beatrice Tamakloe gave the host, invited guests and the entire crew of Nhyira FM’s Obra Show a shock when she landed a resounding slap on the cheeks of Kofi Sefa amid insults, for publicly accusing her of constantly keeping faeces and urine in their bedroom.

The couple had been invited to sort out their grievances and restore their marriage to order. But what was meant to seal the crack in their marriage however took a drastic turn when the woman assaulted her husband.

The video went viral on social media inciting anger from members of the public who condemned the woman action towards her husband.

However, a new video that has emerged shows the woman on her knees expressing remorse while begging her husband for forgiveness.

The man had disclosed that he lost interest in his wife of almost 2 years after she picked a habit of storing waste matter in their single room for days out of laziness.

His narrative was interrupted by the wife who rebutted the claim and subsequently cautioned the husband to desist from spreading falsehood or face her wrath.

The disgruntled wife threatened to slap the hell out of the husband if he continues to spew false accusations.

“Kofi, I’d slap you if you don’t speak the truth. I’d slap you here and now. I’m your wife and I share the same bed with you so why will you embarrass me here like that? All you’re saying about me is not true,” the woman said as she stood on her feet.

But the husband who claimed his account was accurate turned his cheek and dared the wife to slap him. The incensed wife then gave the husband a slap across his cheek.