Young girl slumps and dies while performing in choreography in church 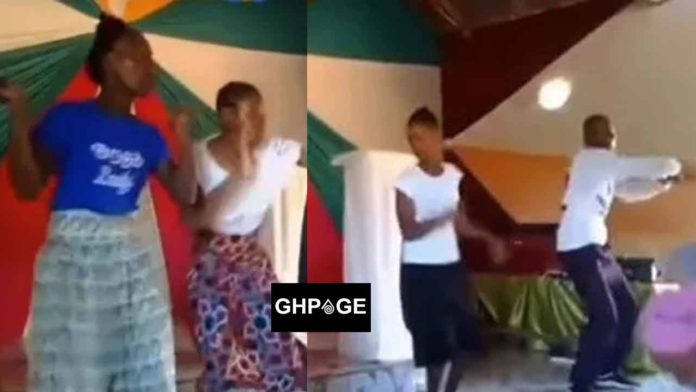 An unidentified young girl has reportedly given up the ghost after she slumped during a choreography performance in church.

In a video that has been widely circulated, the young girl collapsed while she was dancing during the performance.

Shockingly, the other three members who were also on the stage with her continued dancing while their colleague was on the floor.

The young girl remained motionless on the floor for some minutes before some church members rushed to her to ascertain if she was breathing.

According to reports, the young girl reportedly passed away few minutes later, but the cause of her death is yet unknown.

The viral video has garnered massive reactions from social media. Read some comments below;

moonlightbloomer stated; “Someone fell beside you and you continued dancing! I am livid”.

slimshedy321 added; “Clear example of don’t try to impress anyone.. they will fill in your space if you’re not around just do the one you can and then leave the rest. May her beautiful soul rest in the bosom of thy lord”.

karis_gulia commented; “The fact that the entertainment continued is baffling”.

love_dapson had this to say; “The respond to emergency is poor”.

city_of_urhobo also added; “Really sad, they paid no attention to her”.

k_chinonso stated; “This is crass ignorance and stupidity in the name of religion…how on earth did they continue dancing”.

hayfordmajor said; “And they are still dancing ? after she fell … ahhhh ?or they thought she fell under the anointing or what ??“.