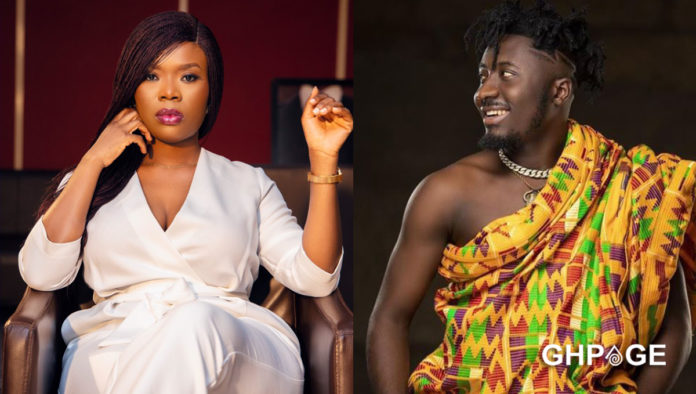 Rapper Amerado happens to sit with media personality Delay, real name Deloris Frimpong Manso, on the Delay Show this week in a yet to be aired episode.

The highly skilled interviewer and businesswoman shared a snippet of the interview on her Instagram page that sees Amerado talking about his love life, as to whether he was dating or not.

Amerado, who confirmed he has a girlfriend, insisted that he didn’t want her to take a centre stage in his musical career because he wants his fans to concentrate on him as an artiste.

Delay then intimated that Amerado’s relationship with his lover might even fall apart when she comes into the limelight and a fan will be replaced.

Amerado was, however, quick to reply that if such a case should happen he could replace his girlfriend with Delay herself.

Delay retorted with a face filled with smiles that he can’t marry her because she is 39 years and he’s just 26 years. She noted that the 13-year-old gap between her and Amerado is a deal-breaker for her when it comes to relationship.

More concerned about the future, she further explained that the ultimate thing Amerado will do is to womanise when she becomes old and unattractive to him anymore.

Check out the video below.