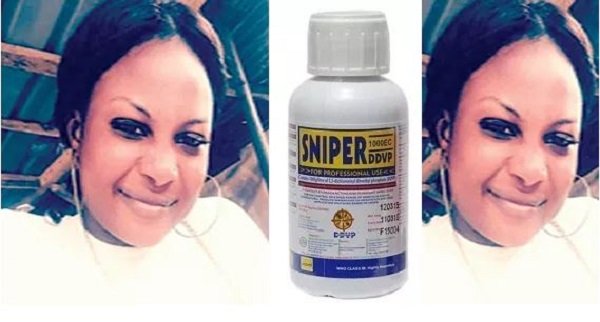 A beautiful lady identified as Miss Tawa Oshunuga who is 21-years-old has reportedly committed suicide by consuming a sniper medicine after her four years dated lover dumped her through a phone call.

The said incident happened within 24 hours after Miss Tawa returned from a weekend getaway with the lover.

According to close sources, the deceased who happens to be a makeup artist got a call from her lover and exempted herself to pick the call.

The source added that though it is still not clear what really transpired between the two lovers during the phone conversation, after the call, Oshunuga reportedly went for a  popular Nigerian insecticide, Sniper, consumed it and died on Monday.

However, just before her death, Miss Oshunuga who was the first and only female child of her mother, reportedly begged and asked her mother to come home, she told the woman that she was having torturous stomach pains.

Miss Tanwa Adekunle who was her friend and spoke to NewsTelegraph, described the death of Oshunuga as a very mysterious one.

“It was in the process of trying to take her to hospital, they discovered a bottle of snipper beside her. It was then people realized that she poisoned herself. At the hospital, doctor referred her to Lagos State University Teaching Hospital (LASUTH), Ikeja, where she was pronounced dead on arrival. That was how we lost our friend.” she said.

READ ALSO: “Miss Universe Ghana Falls In Love With Lee Minho, She Asked For His Number and address” 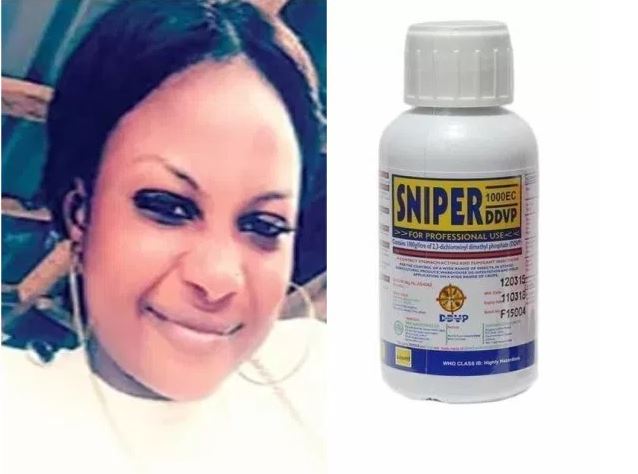 The breakup news came as a true rumor after the death of Miss Tawa, that her death was as a result of a sudden breakup from her boyfriend.

Her mum who lamented loudly, begging people around to resurrect her daughter said she should have wished such crowd to fill her home on Tawa’s wedding day but not her death moment.

The case was reported to the Alade Police Station, Somolu, Lagos, after she was brought back from the hospital.