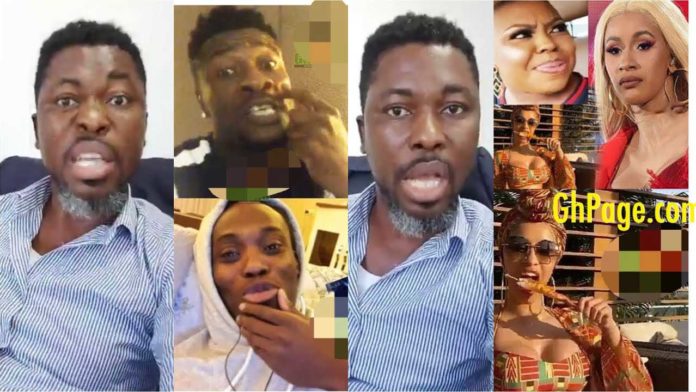 Entertainer turned Politician Kwame A Plus has taken a swipe at two black stars players in the persons of former captain Asamoah Gyan and his teammate Michael Essien for laughing at the celebrities who were snubbed by Cardi B.

Last Sunday, several celebrities turned up at the Kempinski Hotel in Accra for a supposed ‘Meet and Greet’ session with American rapper Cardi B upon her arrival in Ghana for a concert.

After the celebrities waited for some time they realize Cardi B was sitting by the pool eating ‘chichinga’ an act that made the Ghanaian celebrities look stupid who later took to social media to use some unprintable words on Cardi B and the organizers.

Asamoah Gyan in reacting to the story called his teammate and former Chelsea star Michael Essien on video where they laughed at the disappointed celebrities while explaining who actually is a celebrity.

According to A Plus, the definition for the word celebrity is general and doesn’t see the need for Asamoah Gyan and Micheal Essien to redefine the word to make it suit them only.

He added that if the consider someone with a lot of money as a celebrity, then they can’t be called celebrities because they are not up to the standard of Barcelona’s Messi and Juventus Christiano Ronaldo.

A Plus admonished that they local celebrities to know their worth as actress Yvonne Nelson has always been preaching adding that until they know their worth, people like Essien and Asamoah Gyan would not look down on them.

The founder of TPP finally disclosed that he is happy ‘chichinga’ is trending this period because its the year of return and the people coming down would love to know how ‘chichinga’ taste which would put money in the pocket of the sellers this period.