Africans in the UN are monkeys – Fmr US President Ronald Reagan 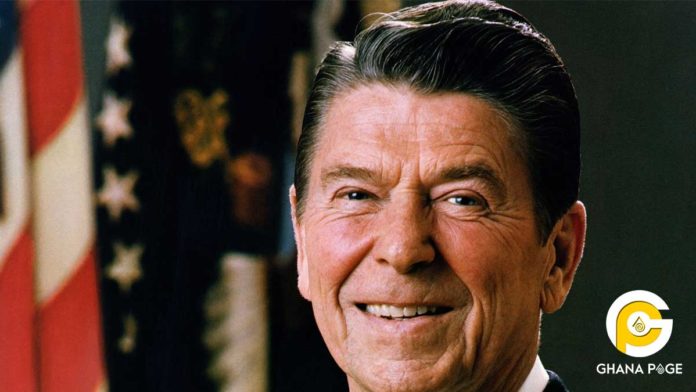 Former President for the United States of America Ronald Reagan referred to African as monkeys whiles speaking in a telephone interview with President Nixon.

This came to light after ‘The Atlantic’ released an audiotape of the fmr. President making such a statement which is a racist comment and an insult to the whole of Africa.

Ronald Reagan made this racist comment on the telephone to then-President Richard Nixon, who infamously recorded all his calls and kept it for the future which we believe is now.

Also Read: Africans on Twitter Respond To President Trump After He Referred To African Countries As ‘Shitholes’

On the reason why he made that statement, it was revealed that he was unhappy that African delegates at the UN had sided against the US in a vote to recognize China and expel Taiwan off.

It emerged that after the vote, members of the Tanzanian delegation started dancing in the UN General Assembly, a move that got him very angry.

BBC reported that when Mr. Reagan called up Mr. Nixon the next day, he asked if he had watched the vote on television.

“To see those, those monkeys from those African countries – damn them, they’re still uncomfortable wearing shoes!” he said in the telephone interview.

The recording was unearthed by Tim Naftali, a clinical associate professor of history at New York University, who had directed the Nixon Presidential Library, which kept all Mr. Nixon’s tapes, from 2007 until 2011.

In his piece in The Atlantic, Naftali explains that the racist exchange was removed from the conversation when it was released in 2000 by the National Archives for privacy reasons – Mr. Reagan was still alive at the time.

Naftali says following a court order the recordings were ordered to be reviewed: “Reagan’s death, in 2004, eliminated the privacy concerns. Last year, as a researcher, I requested that the conversations involving Ronald Reagan be re-reviewed, and two weeks ago, the National Archives released complete versions of the October 1971 conversations involving Reagan online.”

According to Naftali, Mr. Reagan had called Mr. Nixon to press him to withdraw from the UN, but in the president’s telling he says Mr. Reagan’s “complaints about Africans became the primary purpose of the call”.

In one retelling of the conversation to his secretary of state, Mr. Nixon says: “He saw these… these cannibals on television last night, and he says, ‘Christ, they weren’t even wearing shoes, and here the United States is going to submit its fate to that,’ and so forth and so on.”

Naftali says the recording sheds new light on Mr. Reagan’s defense of the apartheid states of Rhodesia and South Africa later in the 1970s.