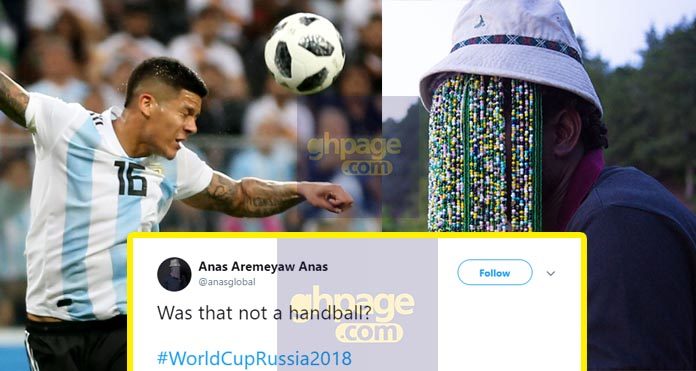 There was more drama in the World Cup on Tuesday in Group D where Nigeria lost 2-1 to Argentina during their final game at the 2018 World Cup against Russia.

Nigeria was in pole position to progress, while Iceland and Argentina both needed victories to keep their hopes alive.

Croatia had already qualified to go into the final game of the group, but who joined them in the last-16 was unclear.

read also: Police to invite Dbanj and wife for questioning

Following the result, Argentina is through to the round of 16 and will be facing France on the 30th of June at 14:00 GMT.

Ghanaian investigative journalist who exposed the corrupt activities of the Ghana Football Association a few weeks ago in his number 12 documentary has questioned the match official for Nigeria v Argentina’s match when the scoreline was still 1-1.

On the 75th minutes, there was a call from Nigerian players for a penalty to be awarded to them but after the referee went to look at the VAR screen, he decided not to award the penalty and that has called for agitation from some football fans.

read this: Wisa has a small manhood as compared to Shatta Wale’s – Afia Schwarzenegger

Right after the game, Anas went to Twitter and quizzed if that ball was not a handball which requires a penalty to be awarded to Nigeria.

Was that not a handball?#WorldCupRussia2018

Lol.. are u watching with the mask on?

eiiii this ref die…Anas tweets on the match. .
Master or this one too nyantakyi hands dey inside??????
ARISE TIGEREYE

FIFA- Football Isn't For Africa.
Nigeria was denied a penalty and Mascherano was allowed to play on with blood on his face just to keep the momentum going for Argentina. ???

read this too: Nigeria to send Messi and Argentina home – says Achilles the cat

Chairman I Knw u are already there so I beg u do your things other wise we will curse FIFA and Messi with Antoa?

I beg investigate into that for Dem,coz dem no get Journalist like u for Naija!! Only u fit help dem,hopefully Fifa go reverse and make dem play again???

E be like u for investigate FIFA den MESSI sef ?

Argentine and Juventus forward Paulo Dybala have tested positive for the coronavirus for the fourth time in six weeks of being in quarantine, according...
Read more
International Sports

Argentine and Juventus forward Paulo Dybala has revealed he has tested positive to the now global pandemic the Coronavirus.
Read more
International Sports

Cristiano Ronaldo and Daniele Rugani were in the same dressing room for Juventus' victory over Inter Milan on Sunday, days before the...
Read more
International Sports

Kobe Bryant, the NBA superstar has been confirmed dead. He died in a plane crash in Calabasas this Sunday morning. According to reports, Kobe Bryant...
Read more