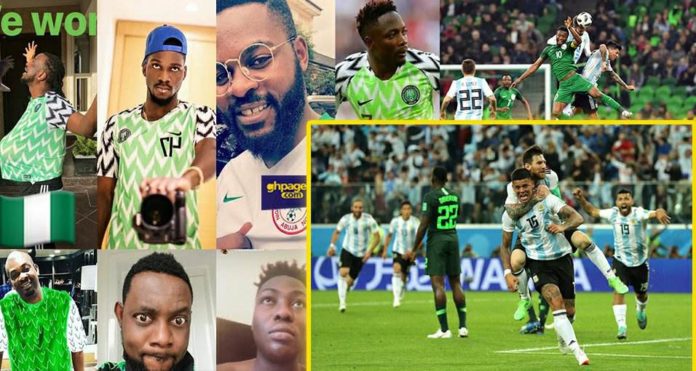 Most celebrities were spotted sharing pictures documenting their trip to Russia and providing moral support for Nigeria football team through their Instagram handles.

The celebrities expressed their anxiety over the match between Nigeria vs Argentina which would have decided Nigeria’s continuous stay in the World Cup.

However, things didn’t go well as expected, Tuesday’s match between Argentina and Nigeria left most celebrities in tears as they were beaten by Messi’s Argentina side.

A very difficult match that was earlier predicted by Achilles the cat from the comfort of the St Petersburg Hermitage museum revealed that-the Super Eagles would win by a nose has become a myth.

Prior to Tuesday’s match, a celebrity was spotted in a video spelling charms on an object purported to be Lionel Messi the ‘Magician’.

“Messi! Messi!! Messi!!! Your ears are too hard, we turn you this way yuh don’t wanna turn, now I am charming through this object to continue as yuh started the world, I will cut one of your leg and the other one too out, then your two hands all, I guess that will stop yuh today” he charmed.

Read Also: Anas questions referee’s decision not to award Nigeria a penalty in their lost to Argentina

If you think celebrities are immune to pain and heartbreak, you are wrong. The truth is that at the end of the day, they are regular people just like you and me, but they all have their share of tragedies.

It was later sighted by Ghpage.com that, celebrities like Falz, P Square, Davido, Tiwa Savage, Banky W and Wizkid were Crying As Argentina Messi Beats Nigeria 2 – 1 at FIFA World cup in Russia.

Messi’s goal — his 65th for Argentina — was surely enough to impress even Maradona.

From a long pass over the defence by Ever Banega, Messi caressed the ball with his left thigh, took another touch with his left foot, and then delivered a smooth right-footed finish into the corner.

Messi fell to his knees and pointed his fingers upward in celebration. At the same time, Maradona crossed his arms with his hands on his shoulders and looked to the sky.

“I knew that God is with us,” Messi said, “and he wouldn’t let us get eliminated.” Messi praised.

The match to tell which team makes it to the next stage-ended 2:1 in favor of Argentina.
Minutes away from advancing to the knockout stage, Nigeria ended up third in the group — ahead of Iceland but a point behind Argentina.

Argentina has four days to prepare for its last 16 matches against France. It is the first game of the knockout stage.