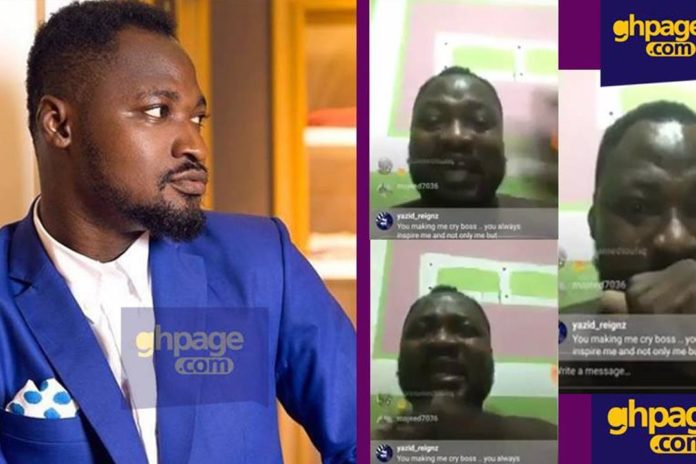 Ghanaian comedian, Funny Face has shared a story of his life on how he had to hustle for 3 years before he suddenly became famous.

Funny face who became known through popular TV series “Chorkor Trotro” on TV3 broke down in tears as he shared his emotional story on his Facebook page after receiving many messages from people who were tired of life and wanted to commit suicide.

Also Read: “You Are Mad”: Davido Insults Ibrah One After He Named Him As One Of The Money Launderers

According to the comedian, he remembers how his mother had to cry way back in 2007 when she saw the hustle he was going through just to make in it life.

Funny Face indicated that he walked from circle to Tema for almost 2years just to crack a joke for only one minute on a radio. He said during that time his mother questioned him “Nana is it by force to talk on radio, then with tears she prayed .. and said to GOD in front of me dat she doesn’t have anything to support me but she prays to GOD to grant my wish !“

But today, thanks to his determination and hard work Funny Face who is very popular among kids, and has been given the name “Children President” has made it in life.

He finally urged his followers that suicide is never an option and that they should never give up no matter what they are going through.

SEE MORE: Patapaa’s Job Before Fame And 3 Other Facts You Never Knew About Him

Imany fires warning to mainstream artists who are into song theft

Imany, an upcoming artiste who reported Mr. Drew for putting out a song originally composed by Rotimi, an American based Nigerian artiste,...
Read more
Entertainment