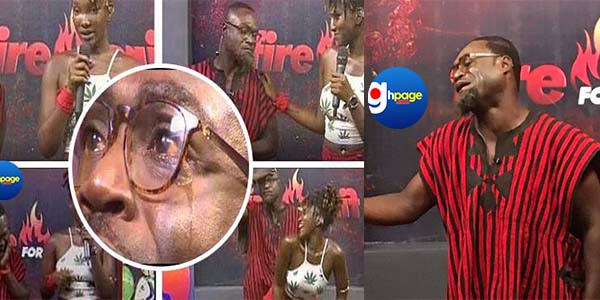 READ ALSO: Ebony Has The Talent But She Needs The Right Mentors- Joselyn Dumas

Countryman within last few months has been spotted several times with the artist on many occasions as they even challenged each other in a dance battle during the Mamba Bash event.

There was once a hype on Countryman Songo, who openly declared his intentions to ‘fire’ dancehall sensation Ebony at the ‘Mamba Bash’.

Ebony in reply, also thrown a challenge to the Adom TV/Asempa FM’s Countryman Songo to meet her in Kumasi to prove his intentions to “fire” her.

Since that interesting moment, Ebony and Countryman have become intimate friends which see Ebony even joining the sports host on his program.

Now, in a Radio interview following Ebony’s death, Countryman Songo explaining his last encounter with his “baby girl’ couldn’t hold back his tears as he weeps uncontrollably to mourn her.

Songo revealed in the interview that he last have a conversation with the artist 3 days ago but as for her recent visit to her relatives, he wasn’t aware of that.

He added that Ebony possess a good character both inside and outside despite all the public criticisms of her indecency and will even wish again to be her friend when he is to meet her again in life.

The 90s badgyal’s shocking death was announced on Friday, 9th January 2018, as reports revealed that she engaged in a fatal accident after visiting her relatives in the Brong Ahafo Region.

The crucial accident was reported to have occurred on the Kumasi-Sunyani road when she was heading to Kumasi for a transit to Accra ahead of her event trip to the United State.

May Her Innocent Soul Rest In Perfect Peace.

Listen to Countryman’s full interview below…..