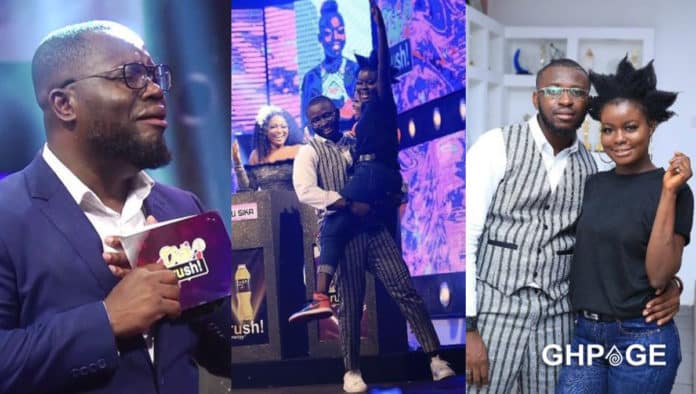 It was a dream come true for Fatima on last night’s episode of TV3’s popular reality show, Date Rush, as she walked off stage with a man for a date.

This comes after several weeks of frustration for getting rejected by many of the men who have, so far, appeared on the show.

On Sunday, June 6, 2021, Fatima, whom many find humorous and interesting left jaws dropping after she got picked by Bismark who preferred her to other ladies behind the podium.

The epic moment saw her jumping sky-high into the hands of her date.

Even the host, Giovani Caleb, was taken aback after Fatima ended up being the last woman standing tall among her peers –

Bismark appeared to be the prince charming for many of the ladies, who were crushing on him, but he decided to choose Fatima over them all.

Watch the epic moment below.

Fatima as well as her crazy dance moves will surely be missed for the rest of the show.

It’s unarguable that she gave organisers and Ghanaians, especially avid viewers, a show to remember for a long time on the back of all previous episodes of the reality TV show.