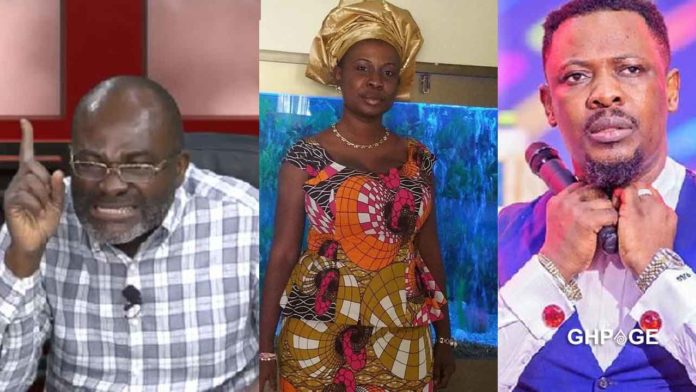 The Honorable Member of Parliament and NPP firebrand, Kennedy Ohene Agyapong lately has been on the nerves of the general overseer of Prophetic Hill Chapel Prophet Nigel Gaisie.

READ ALSO: Nigel Gaisie responds to Kennedy Agyapong on why he buried a sword

Kennedy has championed the cause in exposing Prophet Nigel Gaisie.

Kennedy Agyapong yesterday on Net 2 TV revealed that Prophet Nigel Gaisie has killed one Wendy Fynn who also was the latter’s girlfriend whom he (Nigel) promised to buy her a house because she was ready to come out and disclose her relationship with Nigel.

According to Kennedy Agyapong, Nigel went the extra mile, in order not be disgraced by Wendy Fynn he went to make a down payment of the house he promised to buy her.

Unfortunately for her, Nigel Gaisie had already sent killers down her path when she was on her way to see the house Nigel had promised her. She was murdered in cold blood.

Well, when we all thought Kennedy Agyapong is giving the right information about the real killer of the innocent young lady, Wendy Fynn, he has been exposed big time by one Abraham Ferguson who happens to be a staunch NDC member and also a family member of the deceased.

According to Abraham Ferguson in a Facebook post, he was shocked when he heard Kennedy Agyapong concocting and fabricating pure lies about Wendy Fynn Morris death.

This compelled him to bring out the truth and expose the real killers to prove the innocence of Nigel Gaise over the death of the young lady.

Abraham giving a background history about the death of Wendy stated;

As we speak after the gentleman was arrested, the docket was sent to the CID headquarters and Case is being handled by detective courage Agbodza.

Abraham Ferguson uncovered Ebenezer Boisons as the assailant who engaged in that heinous crime. He added that Ebenezer about a month ago was arrested in Kumasi after he snatched another person’s vehicles.

READ ALSO: Kennedy Agyapong list the names of all his wives and baby mamas'(VIDEO)

The NDC man also determined to expose all the lies of Kennedy Agyapong furthermore compounded that Wendy never attended Nigel Gaisies church and has no single child anywhere in this world and Wendy has never traveled to Germany.

Check out Photos of Wendy Fynn; the alleged former girlfriend of Nigel Gaisie