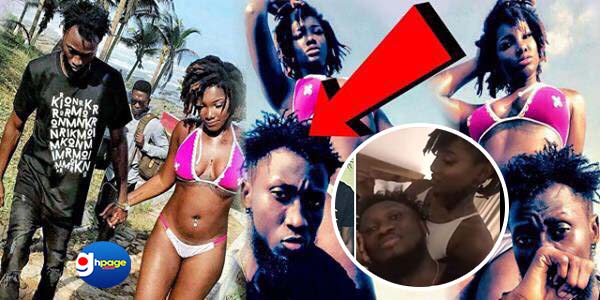 Ebony, whiles she was alive indicated in an interview that she had a boyfriend but refused to give more details. But in the latest video spotted by GhPage.com, the video goes a long way to tell the deep relationship between the late dancehall diva and Ogee, also a musician.

Ogee who could be seen at almost everywhere Ebony found herself; from photo shoots to even when she is on stage and most importantly chopping love at their cosy.

READ ALSO: “Ebony was not too well before she died; she was operated upon 2 weeks ago” – Cousin reveals(Video)

In the video, the late dancehall diva and Ogee are captured in different moods and settings “playing” love. In another scene, the two are captured in bed with Ebony lying on top of Ogee, while Snapchatting.

Ogee, in an interview on GHONE TV’s Rhythm Live on Friday, couldn’t hold his tears when he was asked about Ebony.

He virtually broke down on set weeping like a baby. According to Ogee, he was the one who linked Ebony to Bullet because he saw her great talent and wanted to help her nurture it.

He also detailed how Ebony would always want to cook his favourite meal of Jollof and chicken for him.

READ THIS: Ebony’s look alike causes ‘confusion’ at her One Week Memorial Service(Photos)

“Even a few days before she died, she prepared jollof for me; Ebony knew I love jollof and would always do it for me. She was like my mother,” Ogee said.

“Her smiles were infectious, she had a kind heart, she had so many lined-up activities for this year, we were going to tour Europe.” “Who else is going to be like Ebony? I don’t think we will find someone as special and talented like her,” he added.

According to Ogee, while Ebony and the others were on their unknown “deadly” journey, they were interacting on Snapchat and making fun of themselves. But suddenly, she stopped chatting and he didn’t know the reason only to be told the next day that she had died.

Ebony Reigns born Priscilla Opoku Kwarteng died on the eve hours of Thursday, February 8, 2018, in a gory accident somewhere along the Sunyani-Kumasi road upon her return from her mother as she was travelling to Accra to prepare for her event trip in Abroad.

READ THIS TOO: Ebony’s Daddy reveals why he’s mourning her daughter in all white apparels

According to the family, Ebony Reigns will be laid to rest on 17th March 2108 in Accra. The exact details of the funeral Service and the burial will be communicated by the family in due time.