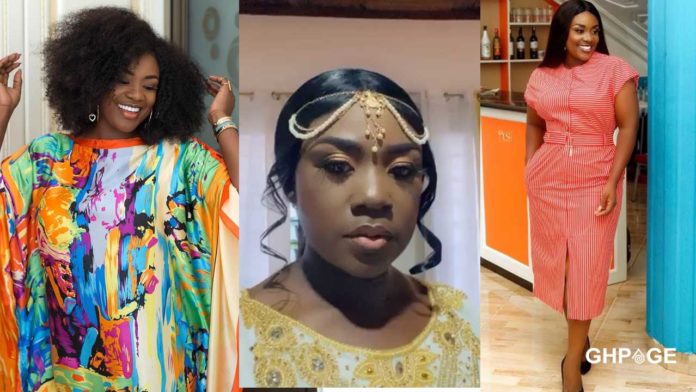 Kumawood actress Emelia Brobbey we believe might be biting her fingernail by now if she knows what Ghanaians on social media are doing to her.

Now that the movie industry is not as vibrant as before, the award-winning actress decided to venture into music and try to make it just like her colleague Yaa Jackson and others are doing.

Her single titled “Fa Me K)” was released last month and some fans and Ghanaians who have listened to the song have stated that the song is not up to standard and not up to expectation looking at the hype it received before its release.

According to some social media users, the actress turn musician wasted her time and that of the sound engineer including the video director who shot the video because they could have used their time for something else.

Check out some comments the song got from social media users

Abyna Sticker: “The orphanage could have been blessed with the money and time wasted on this video. We love Emelia for being an actress and definitely this is by no doubt a wrong move”

Wassa-Nii Ba: “I don’t blame u o. It is d sound engineer who heard this voice n still went ahead to record u. I support this song with two bottles of schnapp and two Asante kosua ???”

Amardiorha: “go chew the testicles of the producer”

Maazy Gh: “Tell her not to enter any studio again.. whats dat”

Phelix-Luther Sytrux: “God punish u Emelia, what kind of nonsense is this??
I can’t feel my ear drum”

Afia Ophelia: “This song should be added to sources of noise pollution”

Mj Dharlynn: “So someone said immediately he played the video,his dog has run away from home…Eeii some people are mean”

Owuraku Prempeh: “In the bathrrom bathing,immediately I played the video the water stop flowing,the foam on my body started drying up,what a wicked voice can do”

Share
Facebook
Twitter
WhatsApp
Previous articleWe were at Kempinski to eat lunch not to meet Cardi B-Lydia Forson & Sister Derby
Next articleAkuapem Poloo and Shatta Wale to be featured by Cardi B?