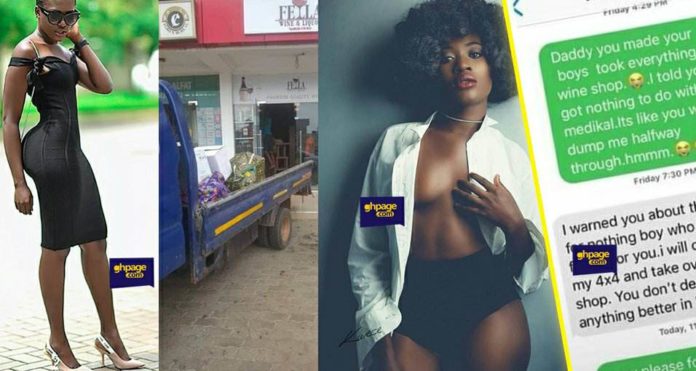 Since yesterday, one person whose name has been on the lips of most social media users in Ghana is the fastest rising Ghanaian actress, Fella Makafui. Fella Makafui shot to fame when she was featured in the popular Youth series, YOLO.

Yesterday news broke that Fella Makafui’s sugar Daddy who sponsors all her expensive lifestyle has broken up with her and he is taking everything back. He started by taking away her wine shop.

The supposed rich man has rented a shop for Fella Makafui in one of the richest suburbs in Ghana, East Legon. Fella Sells wine at the shop. The man has also rented a 3 bedroom apartment for the actress and has equally bought her brand new car.

But according to sources, the man claims Fella’s attitude towards him has changed. She pays little attention to their relationship. The man also claims he even suspects Fella is cheating and all his warnings to her have fallen on deaf ears hence the decision to call off the relationship and with it, all his properties.

SEE ALSO: Efia Odo shades Fella Makafui after her angry boyfriend closed down the wine shop he opened for her

Fella Makafui came out to deny this news which is fast going viral. According to her, she is only relocating and not closing up as being speculated by her “Enemies” notably by actress Efia Odo.

She explained that her landlord has increased the rent abnormally and she can’t bear it so she is relocating to a cheaper shop. But she has not told Ghanaians and her fans where she is relocating to. She even threw shade at Efia Odo by calling her stupid for jubilating on false news.

Well, a screenshot of a chat is going viral on social media and if found to be true, then it will prove that Fella Makafui’s excuse of relocating is false and she has really been dumped by her angry sugar Daddy.

From the chat, Fella Makafui is chatting with someone she referred to us Daddy to forgive her because she has no affair with Medikal. She begged him to give her another chance and it won’t happen again.

One of the messages reads:

Daddy you made your boys took everything from the wine shop. I told you I’ve got nothing to do with Medikal. It’s like you want to dump me halfway through.hmmm