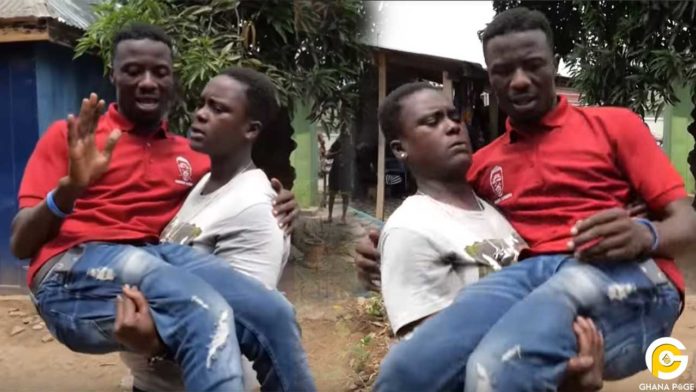 Kumawood actor Kwaku Manu in one of his recent ‘aggressive’ interviews got the surprise of his life as he got carried up by the interviewee — a lady who lives in the ghetto — self-styled ‘Ghetto Queen.

The ‘queen’ who is popularly known as Missy Elliot but born Alimatu revealed she is a mother of one named Indomie who — to an extent —had to stop going to church to hussle her way through to make ends meet.

According to Missy, she stumbled into smoking at a younger age when some women in the house she stayed in use to send her to buy cigarette for them.

She continued that, after buying it, they will instruct her to light it up — and in doing so—she was forced to take a puff so the fire in the cigarette doesn’t quench before she hands it over to them.

And after every puff, she will feel dizzy and one day she decided to go and buy some for herself to get the full experience of how it feels to smoke. By then, she was at the age of 15.

READ ALSO: Rev Obofour went to beg Michy on my behalf but she didn’t mind us – Shatta Wale

After that, she turned into drinking alcohol. Interestingly, that also started the same way as it started with smoking. When she is sent to buy the drink then she will take a sip.

The ghetto queen further stated she realized the alcohol and the cigarette weren’t good for her as she easily gets tired after taking them so she stopped and resorted to weed.

To her, the weed makes her calm and without it rather makes her harsh and gets angry so easily. Very ironic!

It also makes her strong, she added and to prove that she decided to carry Kwaku Manu.

Watch the full interview below;

Alimatu appealed that the herb should be legalised.

Kwaku Manu in his aggressive interviews, which started as only interviewing the stars have taken another turn to get to know the stories of the unknown.