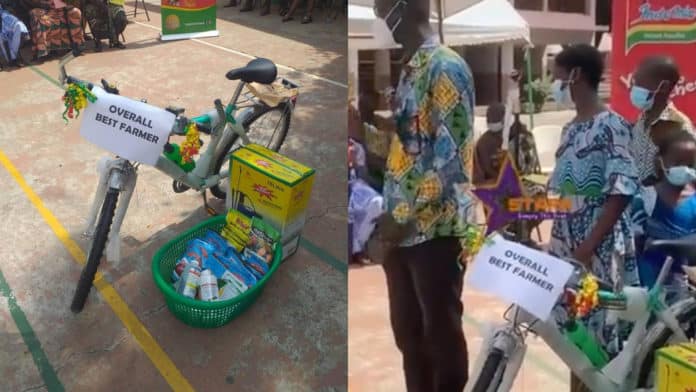 Social media has been reacting to the video and photos of the best farmer in the Greater Accra Region being presented with a bicycle, sprayer, and hamper to honour his work over the year.

At a ceremony to honour farmers and fisherfolk on Farmer’s Day, the best farmer was given these items which many term inadequate and unfit for a poultry farmer who has worked all year round.

Humbled and with his hands clutched in front of himself, the farmer looked on with a bit of indifference as the items were announced and presented to him.

In the 21st century where farmers need requisite tools and implement to aid in their work, was a bicycle the right thing he could be given? This is the motion for debate.

Meanwhile, others believe since he lives in the remotest part of the capital, it was fair that he was given a bicycle that could aid him to and fro, a sprayer to ensure his birds are well protected against flu and other infections and hamper for the Christmas.

The opinions are varied. He received these items at the ceremony held at the regional level to honour deserving farmers and fisherfolks. The national best farmer is expected to receive a house, a car and cash.

Check Out Video Below: