I have a good relationship with Dede Ayew -Asamoah Gyan 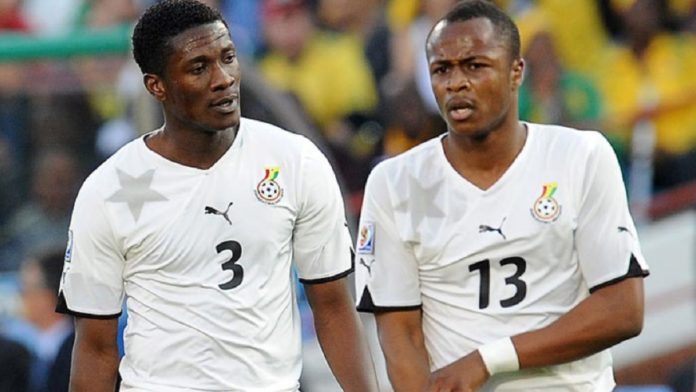 Ghanaian footballer and striker for Kayserispor, Asamoah Gyan has denied rumors that there is bad blood between himself and Andre Dede Ayew.

According to the 33-year-old striker, he has a very good relationship with the new captain of the Black Stars when in camp.

He added that Dede Ayew calls him anytime he has issues and they have good conversations.

Asamoah Gyan further stated that at times they even have business discussions but that doesn’t mean they are friends.

“He comes to share ideas with me and we talk. We are cool. He calls me and we even talk about businesses sometimes but it doesn’t mean we are friends,”

When the Black Stars are not in camp, I have my own crew I hang out with and Ayew also hangs out with his friends and family. I don’t need to hang out with Ayew outside of camp to prove any point”, Asamoah Gyan stated.

This comes after it was purported that Asamoah Gyan and Dede Ayew have some sort of rivalry going on due to captaincy issues.

Dede Ayew was appointed the new captain of the Black Stars which infuriated Asamoah Gyan and later retired from the team.

However, the president of Ghana, Nana Akufo Addo intervened which made Asamoah Gyan rescind his decision from retiring from the Black Stars.