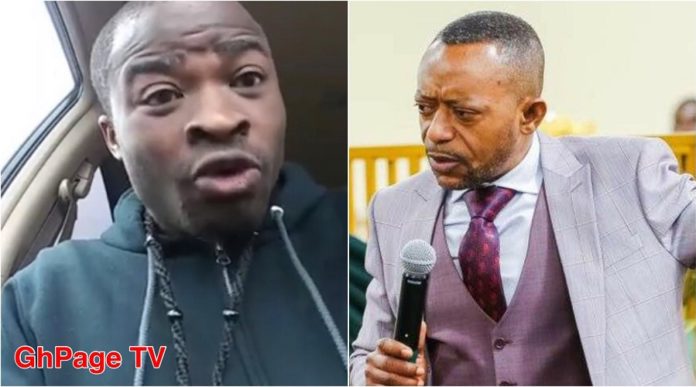 Controversial self-acclaimed man of God popularly known as Evangelist Addai has vowed to hire assassins to kill the Founder and leader of the Glorious word and Power Ministry International, Reverend Isaac Owusu Bempah.

According to Evangelist Addai, if the leaders of the country cannot put a stop to the unnecessary death prophecies by Owusu Bempah he will find a way to eliminate him.

This is in relation to a statement made by Owusu Bempah concerning Avraham Ben Moshe’s comments describing the leaders of Ghana as ‘senseless’.

According to Owusu Bempah, if the leaders governing Ghana are senseless then the same applies to Avraham Ben Moshe’s family members.

Owusu Bempah also stated that if Avraham is a wise person what benefit has Ghana derived from his wisdom.

Avraham Ben Moshe is the leader and founder of common sense family and the House of Torah Jewish (Noachide) congregation of Ghana.

This statement by Owusu Bempah infuriated Evangelist Addai which resulted in him threatening to kill the man of God.

Evangelist Addai also added his voice to Avraham’s claims saying that if the leaders of Ghana are wise they will not be a building a cathedral in a country where there are no jobs.

“There are no jobs in the country, what sense does it make in the building of the cathedral?

Chinese nationals are allowed to engage in illegal mining activities in Ghana and prophets are allowed to give fake death prophecies, What are the leaders doing about it? I will not remain silent about this anymore. I will hire people to kill Owusu Bempah”, he stated.