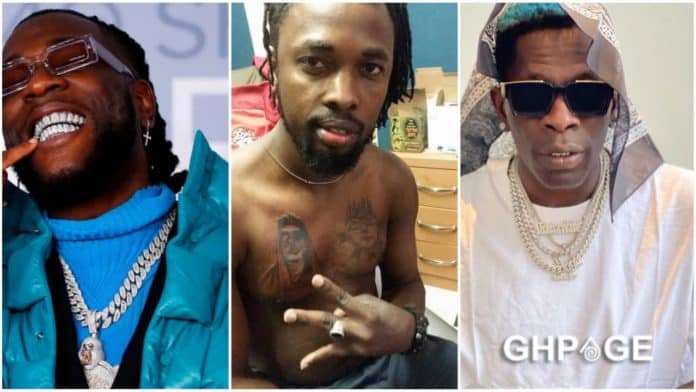 According to Wizla Finto who was present at the genesis of Shatta Wale’s career, his former ally is a rapist and aside from forcing himself on Burnaboy’s ex-girlfriend, he has done the same thing to many other ladies.

READ ALSO: Shatta Wale sets himself on fire after confessing to being a rapist in a fresh attack on Burnaboy (Screenshot)

In the hot video that has gained massive reactions from shocked social media users, Wizla Finto explained that Shatta Wale slept with Burna Boy’s girlfriend when he wasn’t around one time and that is the cause of their feud.

Contrary to Shatta Wale’s claims that Burnaboy is ungrateful, Wizla Finto has rubbished that claims by Shatta professing that the Grammy awardee is a very good person, unlike Shatta who is filled with wickedness.

After Wizla Finto totally destroyed Shatta Wale in his self-made video, he also blamed Ghanaians for our own problems hence we should leave Nigerians alone and focus on making better songs.

The beef, or in other words, the social media brawl between Shatta Wale and Burna Boy got feisty over the weekends as each decided to wash the other’s dirty linens in public.

In a reply to Shatta Wale Burna Boy alleged that the SM president attempted to rape a lady he introduced to him. He described him as a rapist and would have terminated his life long ago.

Burna Boy also added that Shatta Wale owns nothing and leads a borrowed life which he uses to spite his competitors and to court public attention.