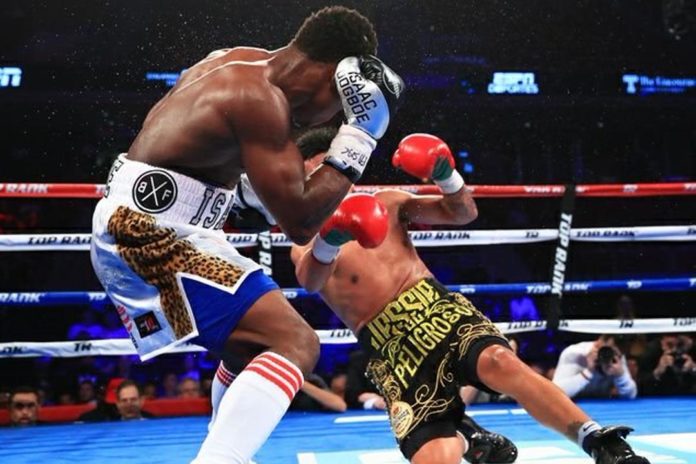 The Ghanaian won by TKO in eleven rounds.

The 23-year-old did it remarkably, considering he was knocked down in the first round after walking into a well-timed left hook. But he recovered well, and his heart, honed from 11 straight victories, shone through.

Despite all the pre-bout hype which seemed to suggest that this would be an emotional fight for the Mexican, it was Dogboe who was in control for large portions.

A decisive moment came in the fifth round when Dogboe’s dominance was rewarded.

Magdaleno, under fire from the Ghanaian, went down. Though he got up, that round could not have ended any quicker for him, as he wobbled for the duration of the seconds left.

Also Read: I fear for my life; A Mafia leader who I impregnated his daughter in Australia is hunting me -Ayitey Powers

Magdaleno came into this contest also undefeated, and just like Dogboe, showed a lot of character after being floored.

He gave a fair account of himself from round seven, as Dogboe sought to still exploit the shocking spaces in the 26-year old’s guard.

Round seven. Eight. Nine. The bout went this way and that, but by this time, the Ghanaian’s earlier knockdown was a distant memory. He was in control of the score now.

By the end of the tenth, it was clear to Magdaleno’s corner that he needed to throw in the kitchen sink. “Jessie, you have to punch better. You need to finish him to win,” came the instruction before it resumed.

However, Dogboe was in no mood for a comeback.

The eleventh was decisive. From the moment the bell was tolled, the Olympian went for the kill, and soon, Magdaleno was kissing the canvas. Not once, but twice. On the second knockdown of that round for the Mexican, the ref did not allow him to get back.

Ghanaian and Deportivo Alavés midfielder Mubarak Wakaso has been captured in a photo lying on a hospital bed with his arm bandaged....
Read more