Perhaps to prove herself to Ghanaians and her critics [Watch] 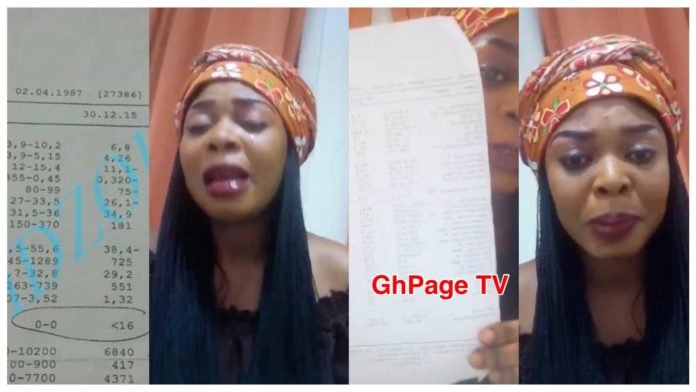 The former AIDS Ambassador, Joyce Dzidzor Mensah has made one last attempt to prove to Ghanaians that she does not have the HIV virus and has never had the Virus by publishing her HIV test results on social media.

According to Joyce Dzidzor Mensah, she had the test in Germany and he requested for an extensive test to determine if the results exist in her system or not. To her, that is the only way she can put the matter to rest and vindicate herself.

She explained through a Facebook Live video that, the doctors told her she does not have the infection when she went back for the result a week later.

Joyce Dzidzor Mensah asked people who find the test complicated to show it to their doctors for a clearer explanation. The popular drama queen further called on people victimizing her children to cease now that they know the test results.

SEE ALSO: How Ghanaians are mourning the death of Willi Roi on social media

“When I walked into a hospital in Germany, this was what I opted for and when I went back a week later to pick my results the Doctor said to me that I did not have any infection.

“She circled the HIV virus _0_0 and said it means no detection, no infection. If the result is too complicated for you, show it to a professional to read it to you.

“Those of you commenting my life on social media and in real life, you can now keep the results, Laminate it and hang it in your room if that makes you happy. Those of you who are still stigmatizing my children stop it now because you have seen it now,” Joyce Dzidzor Mensah added.

SEE ALSO: Beautiful Ghanaian banker dies on her wedding day-She died in her sleep before the wedding [Photos]

Joyce Dzidzor Mensah was made the HIV-AIDS Ambassador in Ghana after she came public that she has been infected with the Virus and she wants to use her situation to educate Ghanaians of the deadly diseases.

SEE ALSO: This is what Sammy Flex has to say about the death of Willi Roi

Few years down the line, Joyce Dzidzor Mensah had a fallout with the AIDS Commission and came out with the shocking news that she does not have the Virus and has never had it. She claims she lied to teach Ghanaians about the disease.

She has been called a lier by the commission and as a section of Ghanaian partly because of her drama on social media and AIDS Commissions statements that indeed she had the virus at the time she worked with them.

SEE ALSO: Beautiful Ghanaian banker dies on her wedding day-She died in her sleep before the wedding [Photos]

Joyce Dzidor Mensah claims the only way to vindicate herself is to publish the test result for all Ghanaians to see.