Kasoa ritual murder: Suspect reveals last question of 10yr-old victim before hitting him with block to kill him 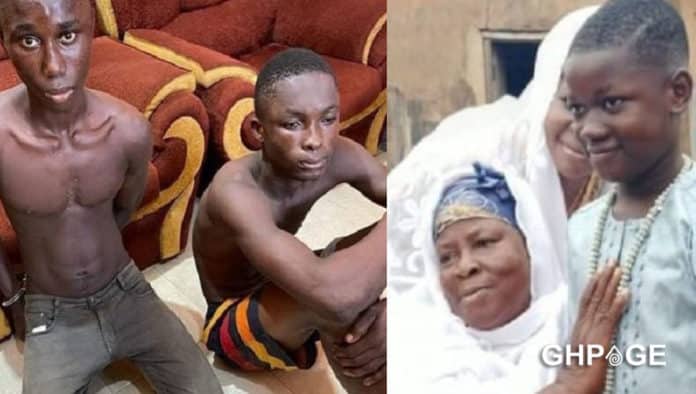 In the last few hours, some chilling details about the murder of a 10-year-old boy, Ismael Mensah Abdullah, at Kasoa have emerged after two teenagers standing trial confessed to the crime when they appeared before the Kaneshie District Court on Monday.

Earlier, the first accused person, Felix Nyarko, 15, disclosed to the court that he and his accomplice Nicholas Kwame Kani, 18, had killed a pregnant woman in the past.

Although Felix did not say when exactly they murdered the pregnant woman, he said the murder of Ismael Abdullah is not the first time they have killed someone.

Felix Nyarko aka Yaw Anane during the proceeding told the judge, Rosemond Agyiri, how he and his accomplice, Nicholas Kwami Kani, ended the life of Ishmael Abdullah.

According to a Joy News report, the minor told the court that they smoked Indian Hemp (Wee), and fell asleep the night before they murdered the class three pupil.

The two teens who so desperately wanted to be rich had contacted a fetish priest they had seen on TV. The priest requested a human body and ¢5000.

According to him, their initial plan was to kidnap “his friend” and demand a ramson of ¢5000 from his family and later kill him.

Felix said on the Wednesday before April 3, 2021, murder, they were about to kidnap their victim but Ishmael Abdullah’s mother called her son so, “I was not able to kidnap him like we planned.”

The 15-year-old told the court that on the day of the incident he had convinced the victim about how his accomplice had got a new video game and told him to follow him to where Nicholas was so they could play the game.

The minor said upon reaching the uncompleted building, Nicholas was already waiting for them and he assisted the victim to climb into the room.

“When we got there, Nicholas told Ishmael (victim) that the game was in the sack over there so Nicholas bent down to pick the game from the sack. Nicholas then used a club to hit the back of his head and he fell to the floor, unable to speak. We dragged him closer to us and Nicholas hit him again with the club,” he said.

According to the suspect, although his sister heard a noise and was coming over to enquire what had happened, she walked towards the uncompleted building but “I told her it was nothing so she should go back.”

Yaw Anane said he then picked a block and just when he was about to hit Ishmael Abdullah, “he asked me ‘you that you are my good friend, why are you doing this to me? What have I done to you’?”

Nevertheless, he said he hit the victim with the block but said he was still breathing.

The minor said he then brought two shovels and they dug a shallow hole and dropped the victim inside.

He said realising that the deceased was still breathing, they added more sand while he was still alive.

Felix Nyarko said he picked another block but heard his mother calling him so he dropped it and went out of the uncompleted building leaving Nicholas behind.

He told the court how he later went to fetch water for his mother and upon his return, he saw his parent who asked him how he could have done what he did.

The accused told the court events that led to the discovery of the body and how angry residents of the area subjected them to severe beatings following the incident.

The prosecution led by Nana Adoma Osei, a State Attorney, on Monday presented the court with exhibits which included one shovel, one spade, a club, pieces of cement block, pictures of sand mixed with blood, investigation caution statements of accused persons, pictures of the deceased, and photographs of the crime scene which they intend to rely on for the main trial.

The court then ruled that “based on the statements you made this afternoon, I deem it necessary to commit you to stand trial.”

The two are expected to appear before the High Court on Monday, September 20, 2021.

Meanwhile, the two have confessed to killing a pregnant woman a long time ago.