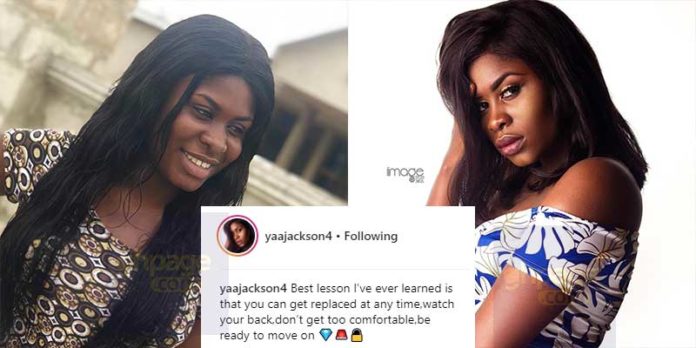 According to the source, the actress who also doubles as a musician is suffering a broken heart which is affecting her emotionally but close friends are helping her to get over the boy.

Well, she joins the likes of Sister Derby, who was also dumped by Medikal but in the case of Yaa Jackson, we don’t know if her boyfriend also ‘dumped’ her for someone with a bigger ‘bortos’.

It was also added by the source that Yaa Jackson has been unable to concentrate on anything as she really loved this boyfriend of hers and her recent updates on Instagram is a clue to what she’s currently going through.

In one of the posts, she wrote; “Best lesson I’ve ever learned is that you can get replaced at any time,watch your back,don’t get too comfortable,be ready to move on ???”

Somewhere in June this year, it was rumoured that Maame Yaa Jackson was dating actor Rahim Banda.

According to the insider who broke the story to us, Rahim Banda has been sending love messages to Yaa Jackson on Whatsapp and her Instagram and every now and then and sometimes engage in video calls when the opportunity comes but we are yet to confirm if indeed it is Rahim who has broken the heart of Yaa.. Stay glued for more updates.