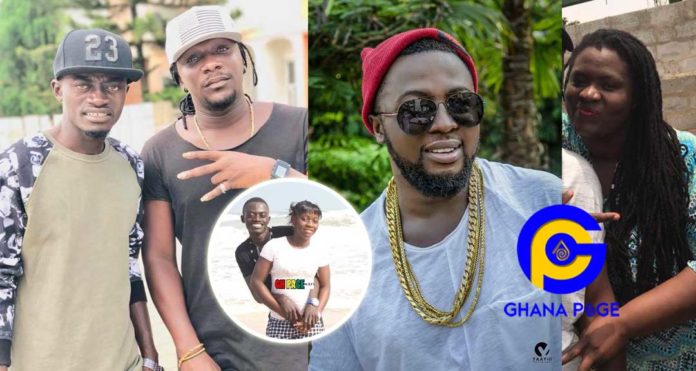 The sister of Kwadwo Nkansah Lilwin’s former manager, Zack Gh has come out to expose Lilwin after Prophet Nigal Gaisie prophesied to him that Zack has locked his voice with a padlock to stop him from singing.

According to angry Ayisha Modi, Lilwin will only be stupid to believe such lies but knowing how foolish he is, he will believe Nigel Gisie whom she described as a fake and occultist man of God.

Revealing why Lilwin is stupid, Zack’s sister shockingly revealed that, Lilwin divorced his wife because of Guru’s girlfriend he wanted to date.

SEE ALSO: Audio: Finally, Wife exposes Kwadwo Nkansah Lil Win as an Abuser and a cheat- Reveals how she was treated like a slave when she stayed with Lilwin

Ayisha Modi explained that the cause of Lilwin’s troubles with his wife started when Lilwin began to date Guru’s girlfriend. Later, Guru dumped the girl and Lilwin fully took charge of the girl.

“When the wife kept complaining of Lilwin’s affair with Guru’s girlfriend and recounted their hardship together, Lilwin divorced her”, Ayisha Modi revealed

Watch the full video below or scroll to 50 Secs and 3: 26 minute for this allegation

In 2017, there were wild rumors of Lilwin’s abusing and cheating on his wife. According to the exclusive report received, Lilwin was cheating with Sandra Ababio, the Kumawood actress.

SEE HERE: AUDIO: I don’t give a damn if Lilwin has divorced his wife over me- Sandra Ababio hits back at critics

As expected, Both Lilwin and Sandra Ababio denied the allegation. Zack’s sister did not mention names so we can not confidently confirm Guru’s girlfriend who caused the confusion is Sandra Ababio.

But Ghpage.com, as your most trusted website, is still investigating and will bring you more updates soon. Stay with Ghpage.com