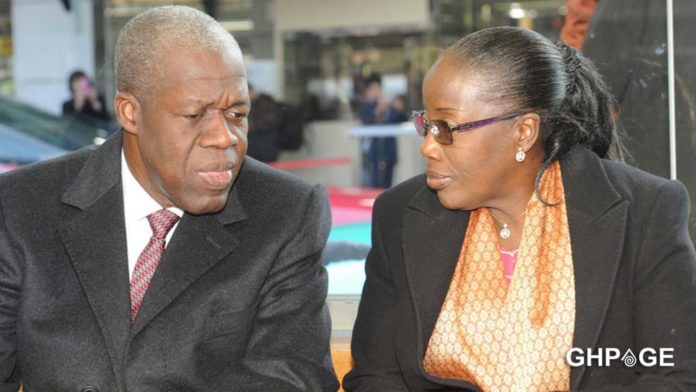 The wife of former vice-president Paa Kwesi Amissah Arthur after some period of silence on the sudden demise of her husband some few years ago has opened up about the circumstances behind his death.

Ghana went silent on 29th June 2018 when it was reported in various news portals that the former Vice-President Amissah-Arthur has passed on whiles he was going his routinely exercise session in the gym.

Stories that went around that day were after he collapsed during the training session, there was no car around and has to be placed in the bucket of a pick-up truck before been rushed to the hospital.

But according to the former 2nd lady of the land, that story was a lie and her husband was rather placed in the back seat of a Benz car before been rushed to the hospital.

Shedding more light on his death she disclosed that her late husband was almost done with his regular training at the gym when he collapsed on the cross-trainer.

“On Friday 29th June, 2018, we got to the Airforce gym at 4.30 am, he did his exercises… we were almost through, he went on the cross-trainer being the last exercise that he [was to] do and then he collapsed,” she narrated to David Ampofo on ‘Time With David’.

She revealed that Dr Naa Tagoe who is a member of the gym and works at Ridge Hospital rushed and resuscitated him checked his pulse everything and said: “We should go to 37 Military Hospital.”

She added that a Senior Military Officer who was also at the gym advised that transporting the late Vice President in his Mercedes Benz wasn’t advisable, so he offered his double cabin pickup.

“We went in a Benz, so the doctor and this officer said if we put him at the back of the Benz its so short that we have to cramp him so I have a pickup; a double cabin pickup, let’s put him on the second seat of the double cabin and let the doctor sit with him and I go with somebody else,” she said.

Mrs. Amissah-Arthur noted that on their way from the Airforce gym to the hospital, the late Vice President had been resuscitated. When they got to the hospital, she indicated that he was first admitted at the emergency ward where his vital signs were checked before being moved to the Intensive Care Unit (ICU).

Mrs. Amissah-Arthur stated that when the doctors broke the news of her husband’s death to her, she quickly requested a post-mortem report because they first told her everything was alright with the late Vice President, “so I was very surprised at what had happened”.

“My husband was a stickler for health… he does six months check-up, he didn’t have diabetes or pressure so I wanted to know… but really he wasn’t put in a bucket of a pickup,” she stressed.