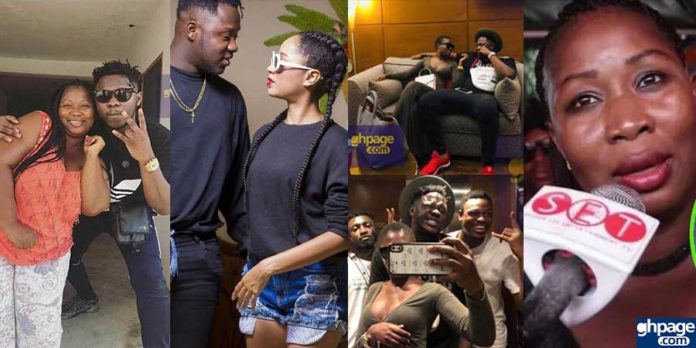 Portia Lamptey, the mother of popular Ghanaian rapper Samuel Adu Frimpong known in showbiz circles as Medikal, has confirmed her son’s breakup with Sister Deborah and his relationship with actress Fella Makafui.

According to Madam Lamptey, her son made her understand that he is no more dating Sister Deborah due to some petty issues, and is now dating Fella Makafui.

Speaking to Paa Kwasi Mizpah on Neat FM she continued that tho her son is not married yet – he is in a serious relationship with Yolo famed actress Fella Makafui.

“He made me understand that he is no more dating Sister Debbie due to some issues and because of the God I serve I can’t lie, so he is now dating Fella Makafui”Medikal’s mother stated.

Moreover, Medikal has finally confirmed in an interview with Graphic Showbiz that his love journey with singer Sister Debbie has come to an end after a two-year ride.

According to him, they have gone their separate ways for a while now. And yes, he has started a new love ride with actress Fella Makafui of YOLO fame.

In the chat with Graphic Showbiz, Medikal (real name Samuel Adu Frimpong) said, “Everything you hear about me, Sister Debbie, Fella Makafui is true. Sister Debbie and I are no more together, although I do not want to go into details.

He is not my friend from anywhere, I don’t know him- Kwadee finally replies Lord Kenya

Jerry Anaabaa known in the media circles as Okomfour Kwadee has rebutted Lord Kenya's claim that his family has threatened to sue...
Read more
Entertainment

Ghana's controversial relationship and marriage Counsellor George Lutterodt has once again got social media buzzing after another passing another comment about rape...
Read more
Entertainment

Ghanaian comedian Benson Nana Yaw Boateng aka Funny face has opened up in a post on his social media pages that his...
Read more
Entertainment

Adebayor is my brother for life – Funny Face

Comedian and actor Funny Face has responded to those mocking him after his best friend and brother from another mother Adebayor unfollowed...
Read more

A UK born lady with her deportee boyfriend who has Ghanaian roots explained in an interview how their lives have taken a...
Read more
News

The mother of the final year KNUST SHS student identified as Richard Sam who died some days ago has finally broken her...
Read more