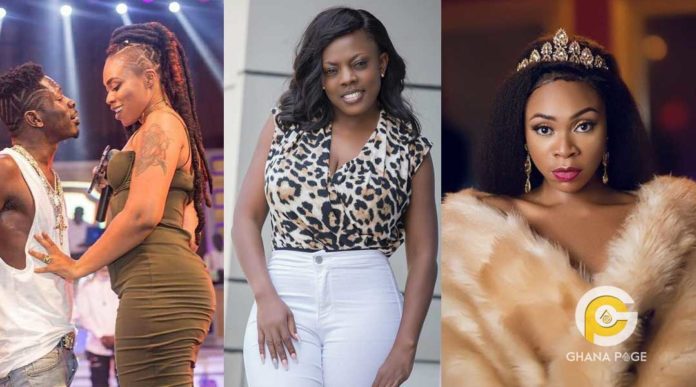 Baby mama of self-acclaimed Dancehall King Shatta Wale, Michelle Diamond alias Michy has responded to Shatta Wale recent comment on Joy Fm Showbiz A-Z that he wanted Michy to be in the corporate world and not the night club type.

The “Gringo” hitmaker last Saturday in an interview with Joy FM explained that he tried several times in trying to make Michy a corporate lady like Nana Aba Anamoah but Michy didn’t like that but rather wanted to be one of the girls that spend their lives in the nightclub.

But Michy reacting to Shatta Wale in a series of snapchat post advised that anyone who looks up to her knows she has been working hard like a ”bull” and that she deserves to party hard like nobody’s business.

She posted: “And to the people that say I’m empowering women & I shouldn’t be in the club, listen any young girl who looks up to me knows I’ve been working nonstop since the beginning of this year, in fact I’ve handled my battles beautifully

And I deserve to party as hard as I work. I might not be perfect one, all prim and proper but at least I am MYSELF, i don’t fake sh*t.”

Also Read: Rev Obofour went to beg Michy on my behalf but she didn’t mind us – Shatta Wale

she continued and posted a caption that sort to suggest Shatta Wale is saying things to make him look good.

She posted: “Do anything for clout fuo”

She finally thanked all those that turned in the club to support her birthday saying Shatta Wale tried to destroy the celebration but he failed.