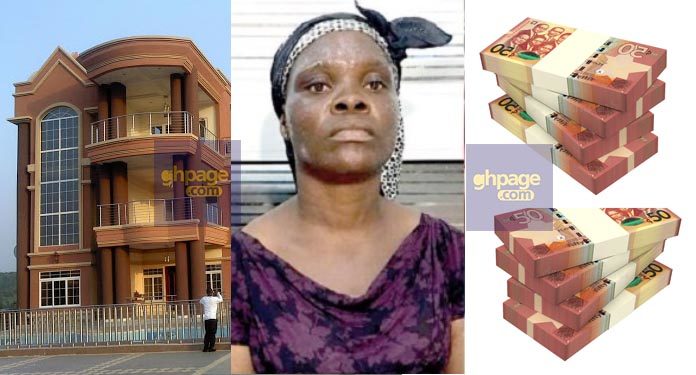 The management of Midland Savings and Loans Company Limited has compensated Patience Osafo, the lady who was assaulted by a police officer, with a brand new house and an undisclosed amount of cash.

Lawyers of Madam Patience Osafo met held discussions with the management of the institution on the compensation package suitable for her, the result of which is a brand new house and an unspecified but huge amount of cash.

Midland Savings and Loans is said to have initiated the provision of a compensation package in order to avoid a civil suit against them following the assaulted meted out to her by the Police officer, Lance Corporal Frederick Amanor, who worked for the bank.

“Well, to avoid a civil suit against Midlands Savings and in compensation for the punches, trauma and embarrassment, we just closed a rather ‘generous’ deal that removes her from the kiosk to owning a brand new house and from the streets hawking toffee to a woman now with multiple bank accounts,”

“Yes, her worries no longer include how to feed her family and provide healthcare for the two months old baby. Her 270-Cedis savings account now holds a six-figure sum,” her lawyers disclosed on Newsfile.

Last week, a video went viral where are police officer identified as Lance Corporal Fredrick Amanor was beating a woman also identified as Patience Sarfo who came to the bank to withdraw an amount of GHC 250.

Members of the public expressed outrage over the incident and subsequently the policeman was arrested and placed in custody whilst investigations into the case started.

Lance Corporal Frederick Amanor has pleaded not guilty to the charge of assault as he was put before an Accra Circuit Court presided over by Mrs Jane Harriet Akweley Quaye on July 27, 2018.

He was therefore remanded to reappear on 8th August 2018.