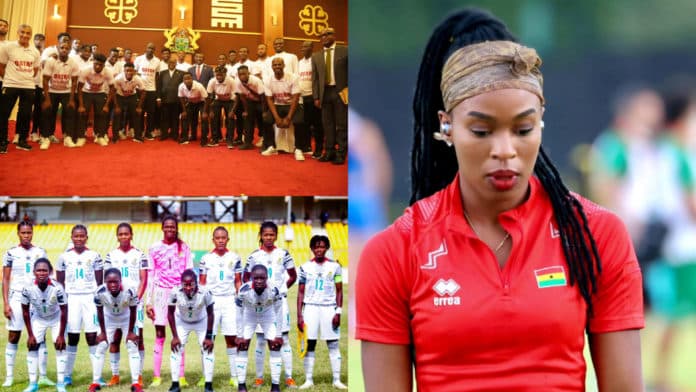 Nadia Eke, a triple jumper from Ghana, has expressed her concern with the men’s senior national team’s apparent preferential treatment in qualifying for the 2022 World Cup.

The President, Nana Akufo-Addo, and Vice President, Dr Mahamudu Bawumia, visited the Black Stars players and technical team at the Jubilee House on Wednesday, a day after they earned a 1-1 draw against Nigeria in Abuja to book a place in the tournament in Qatar.

After missing out on Russia 2018, it was the Stars’ fourth World Cup appearance in five attempts.

The Women’s U-20 squad, the Black Princesses, had qualified for their sixth consecutive World Cup two days previously by defeating Ethiopia 2:1 in Accra to secure a 5-1 aggregate victory.

The Princesses, unlike the Black Stars, were not given a special public audience with the President and Vice President at Jubilee House to celebrate their World Cup qualification.

Irritated, the Olympian chastised the President for giving the Black Stars preferential treatment, urging that the “same energy” be given to the Princesses, who had also done the country proud.

She went on to say how dissatisfied she was with the message such an action would convey to young girls in the country.

“Cool and all but I need y’all to keep the same energy for our U-20 Women’s team who also qualified for their World Cup,” she posted on Instagram, along with a photo of Nana Addo and the Black Stars.

“Also what message do we send young girls about their importance when we do stuff like this. It’s 2022, do better. Disappointed but not surprised.”