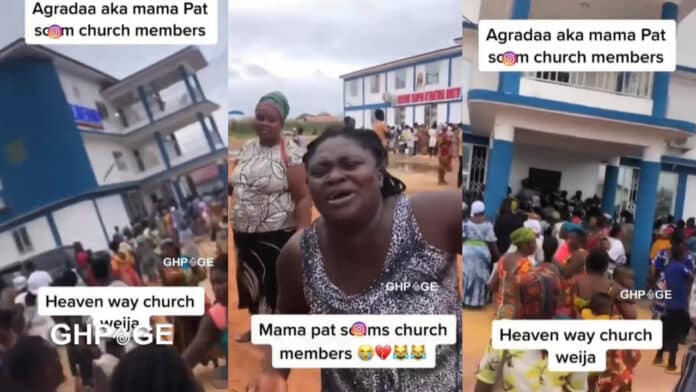 Evangelist Patricia Oduro, also known as Nana Agradaa, has been accused of allegedly defrauding members of her church with her infamous money-doubling scam.

Information gathered indicates the former fetish priestess has updated her “Sika Gari” scandalous strategy and has successfully swindled her first set of victims in her church.

Apparently, Nana Agradaa had earlier promised on TV to donate a whopping GH¢300,000 to her congregation during an all-night service on Friday, October 7.

The exciting news attracted lots of members of the public to her church with the hopes of bagging their share of the money.

But as smart as she could be, she required them to pledge various amounts of money with the guarantee of doubling whatever money an individual offers.

The victims, however, were left disappointed after Nana Agradaa shut her church doors after delivering a sermon and taking their monies.

Videos obtained by GHPage give an account of an aggrieved group of people wailing and protesting at her church premises in Weija to demand a refund of their money.

The self-styled preacher is a former fetish spiritualist and a notorious con artist who claimed to have repented in April 2021, after years of duping unsuspecting victims.

The born-again Christian later founded the Heavenway Champion International Ministry in Weija, which attracted many members within a few months after its opening.

It comes as a surprise that people still fall for her shenanigans and end up being short-changed of their hard-earned money.

One of the victims of Nana Agaradaa’s new church scam speculates that about 5,000 people attended the all-night service because of the announcement.