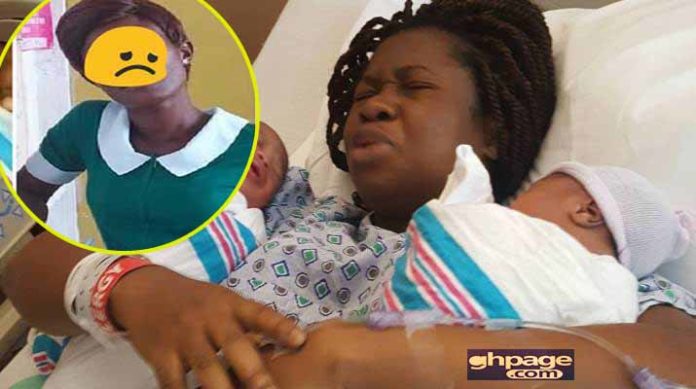 A Midwife at the Suhum Government Hospital in the Eastern Region of Ghana has slapped a woman in labour because she claims the pregnant was making noise.

In a report put together by mynewsgh.com indicates that the pregnant woman was wailing because she was bleeding profusely. The nurse[name withheld] is reported to have slapped the wailing woman to shut her up because she was disturbing the entire hospital.

The pregnant woman, [whose name is also withheld] according to the report hails from one of the towns in Suhum.

After the slap, the pregnant called her husband who was already preparing to come to the hospital to narrate the abuse She suffered at the hands of the nurse.

Upon hearing that, the husband organized and bused prominent family members to the hospital to deal and also protest against the conduct of the nurse.

They threatened to beat up the nurse, but the timely intervention of the security men at the hospital who brought the situation under control.

Thereafter, the family reported the matter to the Medical Superintendent of the Hospital, Dr. Emmanuel Ashong whose intervention is reported to have calmed things down.

Speaking to Accra FM, the Medical Superintendent of the Suhum Government Hospital who indicated that an investigation has commenced into the incident.

He continued that a committee has been set up by the hospital Management to investigate and after the committee’s report, the management will take action against the nurse.

“When the report comes, management will ask on it. The nurse has applied for a leave but we are doing an investigation”.

The mother of the final year KNUST SHS student identified as Richard Sam who died some days ago has finally broken her...
Read more
News

The Prime Minister of Ivory Coast, Amadou Gon Coulibaly has passed on to glory on Wednesday in the city of Abidjan, according to...
Read more
News

The Ghana Education Service has interdicted the headmistress of the KNUST Senior High School in Kumasi over the death of a final...
Read more
News

Another chilling news available to Ghpage News has it that a policewoman has allegedly shot her husband twice in the head with...
Read more
News

Ghpage News a few minutes go broke the news about the death of a final year business student of the KNUST Senior...
Read more

Ghpage News a few moments ago reported about the tragic death of Ghanaian rapper identified as Jay Gunz in the United States.
Read more
News

A pastor who claims to have visited heaven has not only brought pictures to back his claims, he has enacted what he...
Read more
Lifestyle

A UK born lady with her deportee boyfriend who has Ghanaian roots explained in an interview how their lives have taken a...
Read more