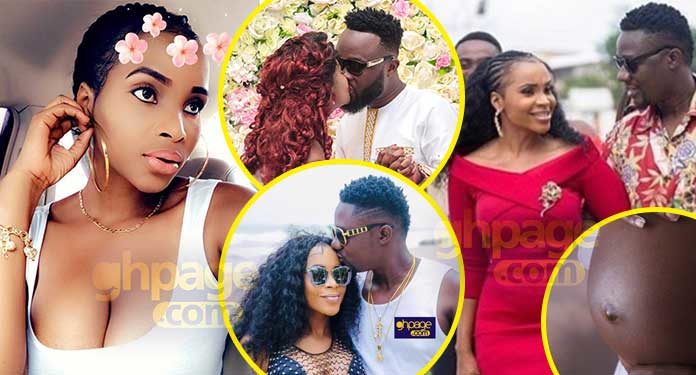 The new gossip in town which has reached Ghpage.com is that Kumawood actress, Benedicta Gafah is having an affair with her colleague actress, Nana Ama Mcbrown’s husband, Maxwell Mensah and even 6 months pregnant for him.

Though it’s not confirmed, it has generated a lot of buzz and discussions on social media, with people asking some important questions on the matter.

read also: Desist from your devilish act else you will disappear like Castro – Prophetess warns Sarkodie

However, the question people keep asking who is really responsible for Benedicta’s alleged pregnancy.

If it happens to be true that Gafah is truly pregnant but not for McBrown’s hubby then who could that be?

Well, let’s take you back to a report we made on 3rd May that Zylofon rapper, Obibini and Zylofon actress, Benedicta Gafah are secretly dating despite the public knowledge that Gafah is dating one Ghanaian Norway based model called Jeffter.

According to what Ghpage.com has gathered, the affair between Gafah and Obibini is not so secret.

Most people around the Zylofon organization know about the ongoing affair.

Both refused to deny or confirm the rumours, but they kept sharing photos of themselves in each other’s company, sometimes in very cozy way.

It happened for quite some time, then suddenly Benedicta Gafah disappeared from the spotlight – only for news to break out that she’s six months pregnant for colleague actress, Nana Ama’s husband.

read this: Prophet revealed the actual cause of Ebony’s death

There were earlier reports that Nana Ama herself is pregnant for her husband but has not been confirmed by both parties.

Due to what we saw Obibini and how Gafah displayed their affection for each other on social media,there’s some possibility that he might be responsible for the pregnancy.

The ‘azonto ghost’ actress for the past six months had remain off the spotlight. She shares a very scanty information about her personal life on Instagram like she use to.

And this many has attributed to her alleged pregnancy.

read more: Photo of Samira Bawumia without makeup pops up on social media