Boakye Agyarko, the Energy Minister has been sacked by Akufo-Addo; The ‘stinking’ Ameri deal and the alleged parliamentary “bribe” could be the reasons 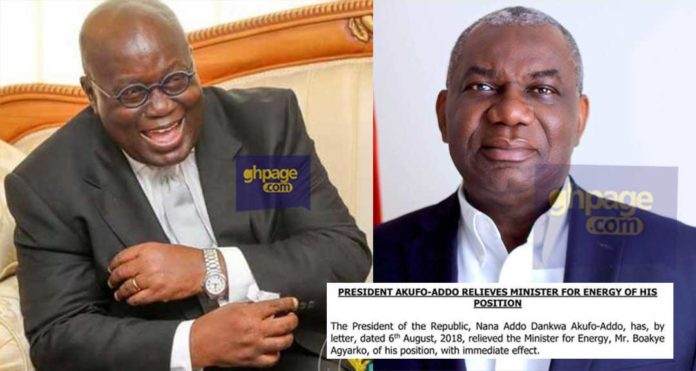 Part of the statement signed by Mr. Eugene Arhin, the director of communication at the presidency reads: “The President wishes Mr. Boakye Agyarko well in his future endeavors,”

The statement added that Hon John Peter Amewu, the Minister for Lands and Natural Resources will take over temporarily as the Energy Minister until the president appoints new minster. But the statement did not reveal why Mr. Boakye Agyarko was fired by the president of Ghana.

SEE ALSO: Should we take it that Amissah Arthur was killed for a new running mate? – Presidential Staffer asks

But Check by Ghpage.com has revealed two things that may have pushed the president of Ghana to sack Boakye Agyarko. The first is the ‘stinking’ renegotiated Ameri deal.

The John Mahama administration in 2015 signed a contract with Africa and Middle East Resources Investment Group (AMERI) Energy, to rent the 300MW of emergency power from AMERI. This was at the peak of the country’s power crisis. The power agreement with UAE-based AMERI Energy cost $510 million.

But according to the Akufo-Addo administration, it found out that AMERI had shortchanged the government as they presented an overpriced budget, and were overpaid by $150 million.

Under the new agreement, Mytilineous International Trading Company will take over the management of the AMERI power plant for 15 years.

The new company has offered to pay AMERI an amount of $52,160,560, with the government paying the remaining $39 million to the Dubai-based AMERI Energy to wash its hands off the deal entirely.

The new deal which was sent to Parliament under a certificate of urgency was withdrawn after Ghanaians raised concerns about the cost.

Ghanaians were made to believe the deal was renegotiated solely by the Energy Minister, Boakye Agyarko. According to Pro-NPP newspaper, Daily Statesman, President Akufo-Addo was reportedly “misled” into granting executive approval for the deal to be rushed through Parliament. The president blames the Energy Minister, Boakye Agyarko for misleading him.

The second thing that may have convinced the president to give up on his Energy Minister, Boakye Agyarko is the “parliamentary bribery scandal”.

In 2017, Member of Parliament for Bawku Central, Mahama Ayariga, alleged that the then Energy Minister nominee Agyarko had given members of Parliament’s appointments committee GH¢ 3,000 each to unanimously approve him after his vetting.

The allegation which was backed by the Member of Parliament North Tongu, Samuel Okudzeto Ablakwa, and MP for Tamale North, Alhassan Suhuyini, led to a probe by a special committee set up by Parliament.

The committee, which was headed by MP for Essikado-Ketan, Joe Ghartey, ruled that Mahama Ayariga’s claims were baseless, and he was subsequently ordered to apologize, which he did, although reluctantly.

Well, Ghpage.com is still following the breaking news and will report back when there is any new development. STAY WITH GHPAGE.COM