Second policeman gunned to death within 24 hours in Akyem Swedru. 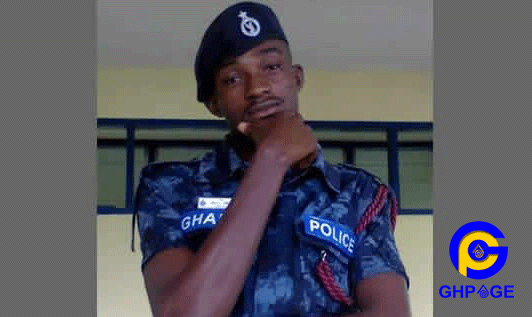 Less than 24 hours a police officer was shot by armed men in the Manso Abodom Dome in the Amansie West District of the Ashanti Region.

Just after this painful incident, according to a situational report, another officer of the law by name L/Cpl. Alhassan Asare was found dead in a plastic chair about 5:40 am on Tuesday, August 20, 2019 while on guard duty at the Dukes Petroleum Filling station.

This regretful incident happened at Akyem Swedru in the Eastern region.

According to reports, he was found soaked in a pool of blood with his rifle in between his legs as he sustained severe wounds on his head believed to be from several gunshots.

This makes it two policemen killed by the gun with 24 hours.

Mr. James Oppong – Boanuh who is the acting Inspector General of Police (IGP) has ordered investigative teams from the Headquarters of the Criminal Investigations Department (CID) to give support to the Regional Command as they investigate into the murder of the two police officers.

See the press release below: 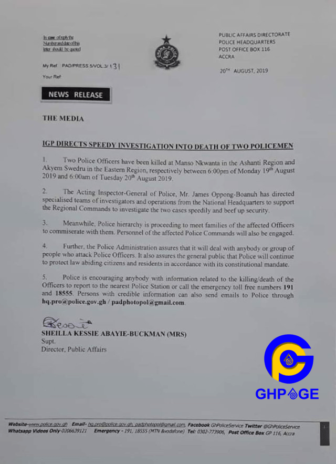 Its barely a week Otumfuo’s sub-chief was stabbed to death whilst traveling on the Ejura – Nkoranza road in the Ashanti Region, then a police officer shot to death in Manso Abodom Dome, within 24 hours another murder of a policeman has been recorded. One may ask, what is happening in Ghana? Is the police service under any kind of threat or attack? We need to be extra vigilant and security conscious as Ghanaians.