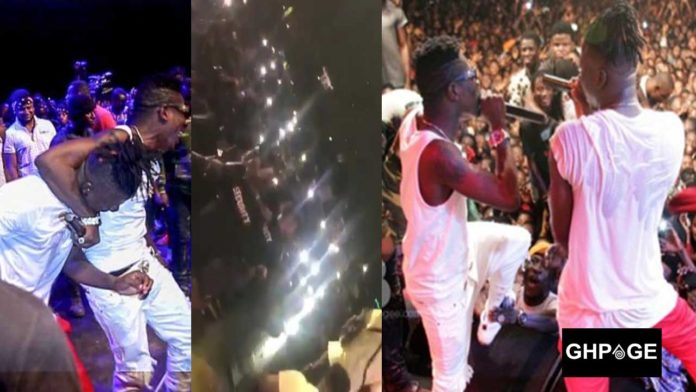 Bhim Nation President Stonebwoy’s ‘Ashaiman To The World’ concert successfully came off yesterday at the Saka Saka Park which is close to the Ashaiman-Tema overhead bridge.

Videos available on social media really indicates that the patrons who gathered at the event really enjoyed the evening.

The two Dancehall rivals Shatta Wale and Stonebwoy at the just ended ‘Ashaiman to the World’ concert, performed together and sang each other’s songs on stage as the crowd cheered on in much excitement.

Shatta’s possibility of mounting Stonebwoy’s stage for the second time became questionable after the two were at each other’s throat during the 2019 edition of the Vodafone Ghana Music Awards amidst other major altercations.

Although Ghanaians have been expectant of this event, little did they think, they were going to witness it this early.

One of the early videos sighted by shows the charged-up crowd at the venue jamming to Shatta Wale’s hit tracks.

The disc jockey (DJ), while warming up the audience dropped Dancehall Commando, one of Shatta Wale’s songs which features Sarkodie.

The song charged the crowd and got them singing along.