Shugatiti mistakenly shows her vagina at her birthday party (Video) 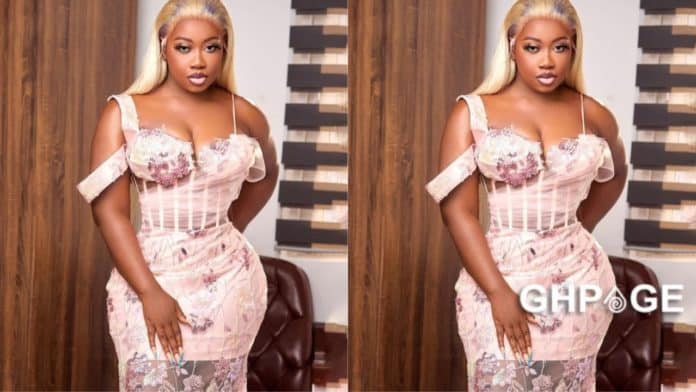 Socialite and promising actress, Shugatiti has taken over social media trends after mistakenly showing her vagina during her 21st birthday celebration yesternight.

Videos from the plush birthday celebration that has gone rife on the local digital space show how a host of other celebrities including Kwaku Manu, Tracey Boakye etc trooped in at Kempinski Hotel (Accra) to celebrate with the young showbiz personality.

In one of the videos, Shugatiti subconsciously raised her dress forgetting that she was not wearing a panty.

Shugatiti’s raw ‘Akosua Kuma” can be vividly seen in the video that has courted an overwhelming engagement on the internet at the moment.

Some social media users have suggested that Shugatiti deliberately raised her dress for her ‘Akosua Kuma’ to show just to create make it into the trends and be in the news.

Others have also propounded that it was a wardrobe malfunction therefore she doesn’t deserve the cold backlash from critics.

Some trolls have also raised concerns as to why she has left her Akosua Kumas to be that busy while a shaving stick is less than 2 cedis.

Since Shugatiti has openly confessed on several occasions that she hates wearing panties and always has the urge to show off her skin, it’s very difficult to defend her in this case.