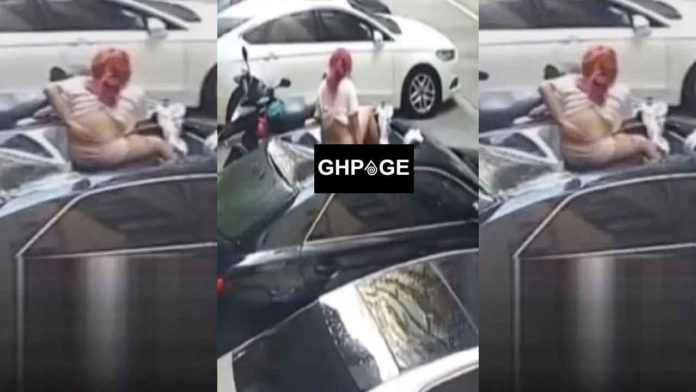 A young woman believed to be a side chick was captured jumping out of a window to escape the wrath of her lover’s wife.

In a video that has been widely circulated, the side chick jumped from the window and landed on the roof of a car.

According to reports, the lady jumped from the 4th-floor window of the apartment after her lover’s wife returned home unexpectedly.

The lady was obviously in pain as she was seen rubbing her back and also found it difficult getting off the car.

Some netizens have shared hilarious comments about this video. Read some comments below;

iam_lordfizze said; “Damn.. dis is really sad. She should have fought her way through instead of dis suicidal act. Damn.. her bodi go hear am wellaly.?”.

stephen_o.a added; “Better to get caught sleeping with someone else’s husband than to destroy your back/waist jumping out of a building, that injury is for life.???????????????“

nana_kofi_ boamah also added; “After this u need to repair the car as well”.

simoneoz had this to say; “spinal cord don break o”