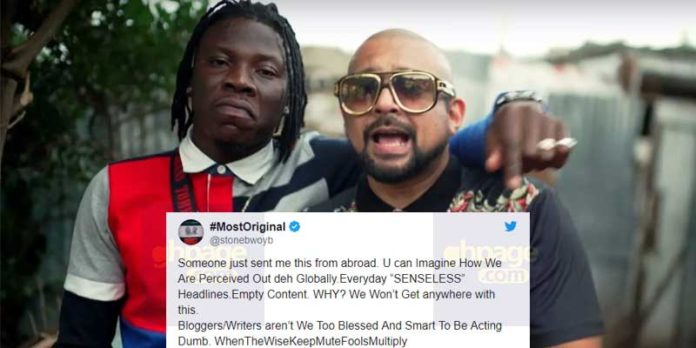 Stonebwoy has reacted to our earlier reports that he removed Sean Paul from his Epistles of Mama album and also changed the day of its release.

The album which was released last December featured artists including Sean Paul, Burna Boy, Sarkodie, Efya, King Promise, Edem and Joey B. The double disk project was made up of 24 songs – 12 Dancehall/Reggae songs and 12 Afrobeat songs but the removal of “Most Original” which featured Sean Paul in the latest update on the popular music store leaves 23 tracks on the album.

But according to Stonebwoy in an angry tweet, he deemed the news as “SENSELESS” and “EMPTY”

“Someone just sent me this from abroad. U can Imagine How We Are Perceived Out deh Globally.Everyday “SENSELESS” Headlines.Empty Content. WHY? We Won’t Get anywhere with this.
Bloggers/Writers aren’t We Too Blessed And Smart To Be Acting Dumb. WhenTheWiseKeepMuteFoolsMultiply“, Stonebwoy tweeted.

Stonebwoy’s ‘Epistles of Mama‘ after its release was rated the second best album in the world. His spot gunned down many heavyweight albums, which saw Chronixx’s ‘Chronology‘ topping the list.