PATHETIC: Strika of “Beast of No Nation” fame back to the streets again in 2019 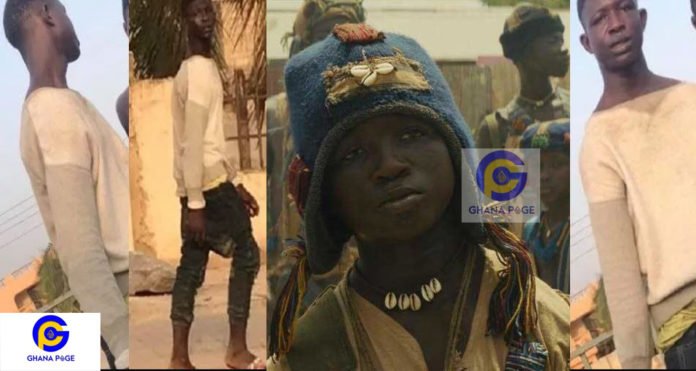 Latest information reaching Ghanapage.com reports that Emmanuel Nii Adom Quaye aka Strika who was featured in the famous movie, Beasts of No Nation fame is back to streets again.

Despite the persevered efforts to enroll him in school in order to do something meaningful with his life, the hustle boy still prefers the wayward life.

He is normally seen in the company of other street guys and it shocks many who thought he was doing something productive with his life.

Read Also: Kooko makes a warm donation to the inmates at the Sunyani Central Prisons

Strika was first enrolled into Cape Coast Montessori School but he abandoned the school and was on the streets begging for alms.

In the first process to save him from the street life, the headmaster of the school was quoted as saying, “He keeps running away from school. He ran from school ahead of last term’s examination. The last time we found him was at ‘wee’ smokers’ ghetto, and he even asked us to give him ‘wee’ in one instance”.

Now, in the latest story gathered by Ghanapage.com, Journalist with the EIB Network Caleb Nii Boye is shocked why Strika cannot just stay in school after another encounter with him on the streets.

Caleb wrote: “I shed tears bcos I just do not understand what takes him back to the streets after all the bash I got for doing a poor job some months ago by seeing him on the streets of GIJ.

“Within 3 weeks, Strika has been spotted on the streets of Accra. I personally made a colleague take him to his Osu and keep him till I pick him up.

“Strika ran away after my colleague went to his room to change his shirt.

“So Ghanafuo, what do u think we shd do this gentleman, NB: he is not a relative. I just admire the talent and as one who started as an actor, I know a good one shd I see it.

Read Also: ‘Stop telling me how I should act as a lawyer’ – Sandra Ankobiah angrily blasts critics

“This has messed my year up.”