Video: Emelia Brobbey Narrates How She Miraculously Got 2years UK Visa after the so many problems she’s gone through in the UK 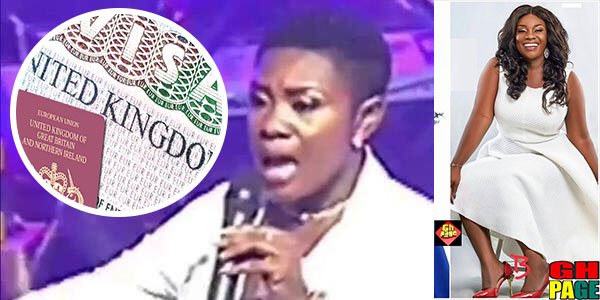 The highly anticipated 2017 Stars in Worship finally took place on Saturday 9th December 2017 at the House of Miracle Ministries, Madina Estates.It hosted celebrities under one roof to win souls for Jesus Christ.

There were several highlights of a beautiful event and one of them was when Nana Ama McBrown took to the stage and grabbed the microphone.She was backed by popular Kumawood actor, Yaw Dabo, and they performed Lil Win’s “Ladder” to perfection [Watch that Video in the post].

As part of the lineups of the event, the celebrities gathered were tasked to give a testimony as to what the Lord has done for them and it got to the turn of Kumawood star actress, Emelia Brobbey.

During her narration, she indicated the ordeal she always had to go through whenever she travels to the UK.

According to the mother of two, things keep occurring from time to time and that makes her keep asking God why her.
?
“Am I not praying enough, am I not worshipping you enough, what exactly is wrong, what is going on.?” According to Emelia, had to keep asking God.

She continued that, she faces the toughest things every year but God is so good has taken her out of troubles.She added that she care-less about the temptations, bullying, and disgrace so far as she has God.

On the UK Visa she stated that anytime she is going to that country she faces something different.

“Recently, I went to premiere a movie and from the UK, I have to go to Belgium to premiere my movie.And then, a night before the premiere, I had my handbag with my iPhone, my passport, my everything and we went into the hall where I was going to do the premiere.We came back and my bag has disappeared.” Emelia Brobbey narrated.

“And then, I just knelt down on my knees and I screamed, God why me!God, what is happening to me!I broke down.I came back to my senses and I said ‘Emelia God knows you can carry the cross, put yourself together’.I didn’t tell anyone because of the temptations, trauma, were just too much.”She continues.

“Then I said, God if I have offended somebody in one way or the other and things are bouncing back to me please forgive me and let me be.I didn’t sleep the whole of Friday night, I prayed and prayed.I reported to the police, we still couldn’t find the passport.” She added.

She went on to say that, people in the UK were calling to ask when she will be coming back but couldn’t say anything.Narrating further she stated the stress she went through by going to the train station in Brussels to try to use the train to go to the UK and they refused.

“I had no choice than to fly back to Ghana from Brussels using a travel certificate.I ask God to bring back where ever my passport is.I then had my passport back with a two year Visa on that same day.”

Watch her ‘miraculous’ testimony below;

She encouraged the audience to resort to God with their problems as when they fall ten times, the Lord will lift them up 10 times.