“Zylofon Media Boss Is An Occult; It Is His Source Of Wealth” -Popular Man Of God Reveals 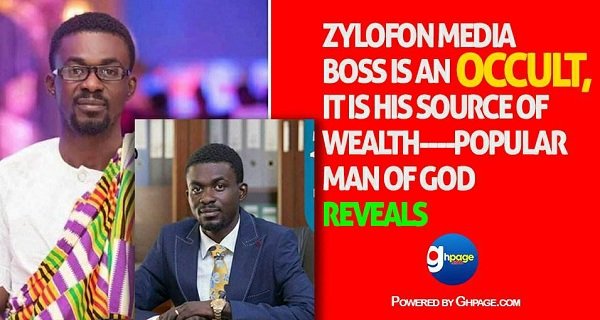 The youngest richest man in Ghana now is Nana Appiah Mensah, the CEO of Zylofon Media, Menzgold and other groups of companies.

Zylofon Media has signed some of the top artist and movie actors in Ghana unto his label. Just this week, he opened UK office of Zylofon Media after littering the whole of Ghana with Zylofon Media offices.

According to Bulldog, an artist manager at Zylofon Media, Nana Appiah Mensah has pumped $30 million into the creative art industry since he entered the scene in 2017.

There have been several questions on his source of wealth in the media lately and a popular man of God claims he has the answer.

According to the founder and General Overseer of Life Assembly Worship Centre, Rev Christian Kwabena Andrews popularly known as Osofo Kyiri Abosom, the young CEO is an occult and that is the source of his wealth.

Speaking on Fire TV, the official Television channel of the renowned pastor, Osofo Kyiri Abosom stated that Nana Appiah Mensah is not only an occult, he is a high ranking member and a leader in the occultic world and that is how he has acquired the massive wealth Ghanaians sees him displaying.

The man of God added that Ghanaians especially artist and actors who are getting close to Nana Appiah Mensah because of his wealth should be extremely careful because his money is evil and it has repercussions on anyone who enjoys it.

According to Osofo Kyiri Abosom, he acquired his money through blood sacrifice and evil deeds hence his wealth is tainted with evil.

Nana Appiah Mensah and his communication outfit are yet to respond to these accusations. Ghpage.com is following the story and will update you on any development. Stay with us.