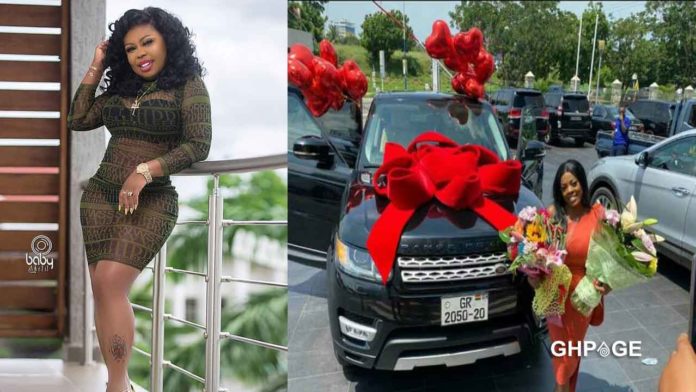 READ ALSO: Afia Schwarzenegger rages on Multimedia as she shares why she’s constantly on their neck

The controversial Tv personality in a video sighted advised the young girls who feel pressured by the glittering lifestyle of some known celebrities on social media to calm down and work hard for theirs.

The 38-year-old public figure further in her advice to the young and naive girls out there said the life is full of ups and terrible downs. Adding that it takes a determined individual to reach to their goals.

Using her life as an example, Afia Schwar said she’s been through a lot in life after she decided to reach out for greatness, her journey hasn’t been a smooth one that’s why she doesn’t fake her lifestyle on and off the camera.

Afia urged them to wait upon the Lord for a breakthrough as it is only God who has the power to make one great.

Reacting to the Nana Aba Anamoah’s fake Range Rover gift brouhaha, she said it was unimportant for the ace journalist to create unnecessary tension in the air for people. Her range rover and the lavish birthday party were all fake she revealed.

Award-winning broadcaster Nana Aba Anamoah yesterday celebrated her 42nd birthday and had a lot of gifts from her friends and well-wishers.

Nana Aba, a highly respected journalist had a brand new 2020 Range Rover car used to surprise her yesterday as her bday present. The car had the registration number “GR 2050-20”.

But according to some social media users, after doing their underground investigation, they came out that the gift was fake because the number was already registered to a different car.

That clearly proved that Nana Aba or whosoever planned the birthday surprise faked it for reasons best known for them.

Advice from the columnist: “A dream does not become reality through magic; it takes sweat, determination, and hard work”.

No matter what industry you work in, hard work and team spirit is the recipe for a burgeoning and successful business. #GrindDayEveryday.