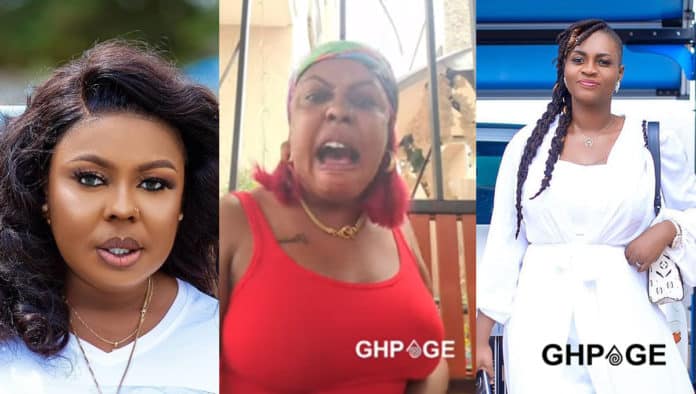 Just when we thought it wouldn’t get any dirtier, Afia Schwarzenegger has taken Ayisha Modi to the cleaners once again in a back-to-back response to the challenge the latter recently threw to her.

Ayisha Modi had gone on a rampage to rain insults and reveal some dirty secrets of Afia Schwar for attempting to discredit her claims that she’s the only personality in Ghana that Moesha Bodoung prefers to talk to amid her crisis.

She then threatened to expose more secrets of Afia Schwar should she dare her or come out to deny the allegations she made against her.

READ MORE: Dare me and I will expose you – Ayisha Modi descends heavily on Afia Schwar (Video)

As expected, Afia Schwar hit back at Ayisha Modi in a live Instagram where she also alleged that Ayisha Modi finger’s the wife of a popular Ghanaian pastor who, in return, gives her money to pay the rent for her apartment in East Legon.

In yet another comeback video, Afia Schwar has alleged that Ayisha Modi has slept with all the female celebs she has organised parties for in this country.

SEE ALSO: You begged and gave me GHC2000 for Pena’s birthday – Afia Schwar

Describing her as a lesbian, Afia Schwar further alleged that Ayisha forces herself on celebs to become their friends by either sending them unsolicited gifts and organising parties for them.

She went further to claim that the man Ayisha claims to be her husband treats her like a mere Facebook fan and not a wife.