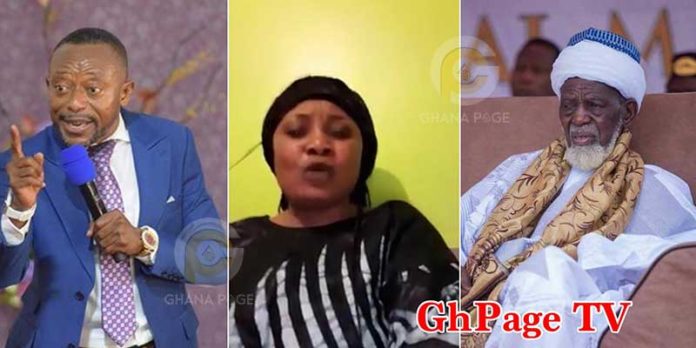 Founder and leader of Glorious Word Ministry, Reverend Owusu Bempah has incurred the wrath of Habiba Abass; daughter of the National Chief Imam for the highest Muslim religious authority in Ghana.

In a video obtained by Ghanapage.com, the daughter who looked so aggrieved after hearing the prophecies of Owusu Bempah on the 31st day of December lambasted the man of God.

As 31st December has become the ideal time for prophets in Ghana to reveal to Ghanaians and their followers worldwide what “God” has for Ghana and the African continent in 2019, Owusu Bempah as many expected dropped the list of prominent Ghanaians who will lose their lives in 2019 at the watch night service at his church.

Read also: ‘Stop telling me how I should act as a lawyer’ – Sandra Ankobiah angrily blasts critics

According to the renowned prophet affiliated with the ruling New Patriotic Party, the president of Ghana, Nana Addo may lose his life through poison in 2019.

Not only President Nana Addo Dankwah Akufo Addo is doomed to die in 2019, his vice president, Dr Bawumia may also lose his life in 2019 if urgent prayers are not offered to save him according to Rev. Owusu Bempah.

Again Owusu Bempah revealed the Chief Imam of Ghana and a prominent King in Ghana who he referred to as King of Kings will so die in 2019.

This infuriated the daughter of Sheikh Dr Osmanu Nuhu Sharubutu to insult Owusu Bempah calling him a fool for predicting doom for the popular Religious leader.

According to her, it is appointed unto every may die and it has never been said that Sheikh Osmanu is immortal, so, therefore, they know when the time is due for him to be called by his Maker, he will leave this earth.