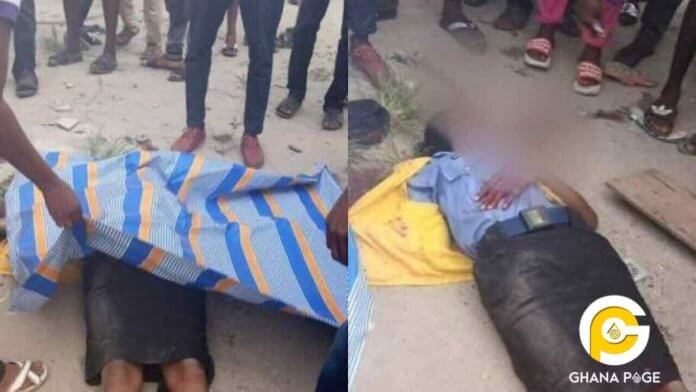 On Thursday 23rd April, 2020 a policewoman identified as Sergeant Lovender Elekwachi, attached to the Eneka Police Division of Port Harcourt, Rivers State, Nigeria met her untimely death after she was gunned down by her fellow policeman at Eneka 1st Market Junction in Obio-Akpor Local Government Area of Port Harcourt.

READ ALSO: Ghana Police speaks on the daylight robbery which occurred in Tema

According to eyewitnesses, the incident occurred when Sgt. Lovender Elekwachi confronted members of the Rivers State Task Force Team who had been instructed to enforce the lockdown and movement restriction order imposed on some parts of the state.

Sgt. Elekwachi was pleading with to them in an attempt to stop them from destroying goods and properties of traders at the Eneka 1st Market Junction when she was shot by the stray bullet.

The policeman and member of the task force, identified as Bitrus Osaiah was exchanging words with a shoe trader who was amongst numerous traders who had flouted the movement restrictions and were selling despite the lockdown order.

According to witnesses, the policeman was seen pulling the shoe seller into a police pick-up van the task force arrived with. This prompted the now deceased policewoman who was a traffic warden at the Eneka 1st Market Junction to interceed on his behalf, asking the police officer to let him go.

The policeman, Britus Osaiah, momentarily let go of the trader’s shirt in order to aim his gun at the trader who had now bent down in order to pack up his wares and leave.

According to eyewitnesses, the policeman was heard saying “I will shoot you ooo” several times and suddenly fired a shot from his already uncocked gun. The bullet landed in the head of the police woman who died instantly.

The traders and tricycle riders at the market junction were enraged by the death of the policewoman whom they described as very kind and professional. They then channeled their anger towards arresting the members of the task force team who has wrecked havoc on their wares.

Traders in the area immediately began dispersing as police men who arrived at the crime scene were irrational arresting and detaining people present. As at 8:00 AM this morning the very busy Eneka 1st Market Junction was deserted with no commercial activities taking place.

Here are some photos and videos from the scene:

According to the Rivers State Police Public Relations Officer, DSP Omoni Nmadi who confirmed the incident the policeman and two other members of the task force have been taken into custody pending an investigation into the incident.

“Yes, it’s confirmed. The police sergeant and two others have been arrested.”

He also confirmed that Sgt. Elekwachi’s body has been deposited in the morgue and the van belonging to the task force has also been impounded.

“The Commissioner of Police, Joseph Mukan, has ordered investigation into the matter with a view to unraveling the circumstances that led to her death and has appealed for calm, pending the outcome of the investigation, promising that the interest of justice must be served in the circumstance.” He concluded.

The late Sgt. Elekwachi is said to be survived by her husband who is equally a police officer and her 2 year old baby girl whom she brought to work each day and left in care of a trader whilst she performed her duties.

The story continues to develop and our correspondents are closely following the story.